I hope you didn’t plan a trip away from Seattle this weekend, because that would have been a mistake. There’s all kinds of bikey stuff to do, some of it pretty wild, some of it family-focused and some of it very somber and deep.

You may not find another bike weekend that better showcases the wide range of the ways bicycles build community and help people express themselves.

Event descriptions come from our Events Calendar. Remember, anyone can add events to the calendar. So if I missed anything, add it and let us know in the comments below.

Needless to say, Dead Baby Downhill is not for the faint of heart. The seriously wild bike party starts on Capitol Hill this year and, as usual, ends in Georgetown for a night of music, drinking and tall bike jousting. Details from the Facebook event:

Alright all you knuckleheads, you know what time it is. For those of you who have been living under a rock for the last twenty years and are just now tuning in, it`s time for the 19th Annual Dead Baby Downhill and Messenger Challenge! THE BEST GOD DAMNED PARTY THIS CITY HAS EVER SEEN!!! I mean… THE GREATEST PARTY KNOWN TO HUMANKIND!!! This year we have a great line-up of bands, enough beer to give a Sperm Whale alcohol poisoning and bikes. Lots and lots of bikes.

Big thank you’s to the Georgetown Merchants Association and the residents of Georgetown for hosting our event for the last eight years and for their continued support into the future.

When attending this event please patronize the local businesses and please BE RESPECTFUL OF THE NEIGHBORHOOD! I don’t think I need to go into specifics so I’ll just end this by saying, don’t be an asshole.

G&O has the opportunity to fill almost the whole block in front of the shop at 85th & Greenwood with bicycle activities, including an obstacle course for kids, mini-Fiets of Parenthood-kinda thing for big bikes, bike decorating stations.

Play on Seattle Neigborhood Greenways teeter totter and curb ramp. And orange cones. Craft ribbon to make handlebar streamers and pipe cleaners to make helmet antennas or decorations to attach to handlebars or other bike parts. 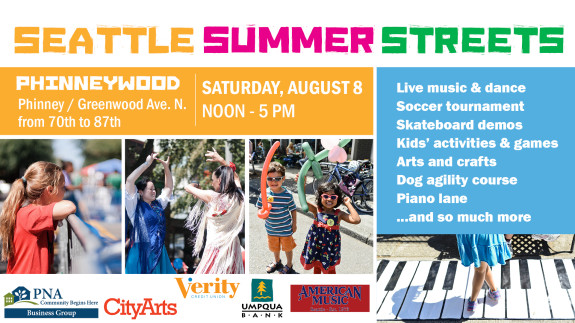 This year’s PhinneyWood Summer Streets is shaping up to be a happening day! On Saturday, Aug. 8, the ‘hood will be hopping with two music stages and over 30 family-friendly activities, performances, and sidewalk sales. Best of all, it’s free!

Bike Around the Bomb

Join the Seattle version of a ride happening in cities all across the nation Sunday. Details from the Facebook event:

What would it look like if a nuclear bomb was dropped on Seattle?

Join the international movement for the elimination for nuclear weapons as we commemorate the 70th anniversary of the atomic bombings of Hiroshima and Nagasaki. We’ll be biking through downtown Seattle, tracing the distance around the Nagasaki bomb blast in solidarity.

There are still 15,000 nuclear weapons in the world today. Many of these weapons are ready to launch at a moment’s notice. It’s time we call on President Obama and other world leaders to stand down these weapons of mass destruction and join the fight toward global zero – a world without nuclear weapons.

Join us Sunday, August 9 for the “Bike Around the Bomb Seattle” event as we cycle the circumference of the Nagasaki bomb blast to symbolize what a “small” nuclear blast would look like in our city and what we stand to lose. Bike Around the Bomb Seattle will be one of the dozens of corresponding events across the world, from Seattle to New Delhi, from Chicago to Islamabad and beyond. Together, let’s remind world leaders that nuclear weapons are designed to wipe cities like ours off the map.

We’ll be gathering at 2pm at the International Fountain in Seattle’s center, and cycle from there passed Seattle’s most prominent landmarks. We’ll have free t-shirts, posters, and more!

This event is both FREE and open to the public. Friends and families of all ages and sizes are welcome!

Use the hashtag #EliminateNukes] to connect online with other 70th anniversary events happening all over the world on this same day. Together, we can :#EliminateNukes

Don’t own a bicycle? No worries! Seattle’s new bike rental service, Pronto!, has rental stations all over the city. Check below for a station map or visit prontocycleshare.com for more details!

Kidical Mass to Bike Around the Bomb

Got kids? Bring them to Bike Around the Bomb, too! Details:

Bike Around the Bomb looks awesome and kid-friendly “Friends and families of all ages and sizes are welcome!”

Meet outside the MOHAI Cafe in Lake Union Park (snacks and potties, yo) at noon.
Need to play at the South Lake Union beach (our fave) or spray park first? Come early!
We will get pedaling at 12:15 so we’ll have time to play or lunch Seattle Center before the main event.

We’ll end at the new Artists at Play playground, and many food options are inside the Armory.
*Hopefully* we’ll be able to get all the kids to migrate to the International Fountain at 2pm for Bike Around the Bomb.

Here’s this info in non-Facebook form if you need to share with friends off the ‘book:
http://familyride.us/2015/08/04/upcoming-kidical-mass-to-bike-around-the-bomb/ 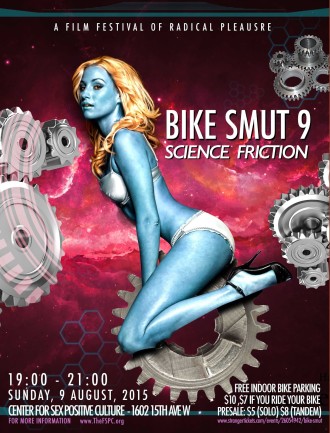 Bike Smut only plays in front of a live audience. There are no DVDs for sale and no screeners for the media. This method of distribution is a challenging but vital aspect of the project. Our lives are spent in isolation when our interactions are mostly through text and technology. Our true sentiments are masked by media incapable of expressing our full range of emotions.

This issue is trebled in the realm of pornography:

This shameful silence only encourages censorship and a bland homogenization of pornography. Only when we use our voices can we challenge what we do not like. Obscenity is merely a community standard. It is defined by the society we live in. If we come together as a community to view a variety of interpretations of obscenity, we can help to redefine our boundaries and inspire better communication, better art and better sex.

Put the fun between your legs.

Cost at the door: $10 ($7 if you ride your bike)
Free Indoor bicycle parking.

Questions may be directed to: [email protected] – Please go to TheFSPC.org for more information.

This event is sponsored by the Center for Sex Positive Culture.

And on top of all this, Sunday is Bicycle Sunday on Lake Washington Boulevard!

UPDATE: Oh, and don’t forget to check out the car-free Pike Street on Capitol Hill Friday and Saturday nights.

Do you feel the need for speed AND the lust for cheese & crust? Then get ready for the event you’ve been dreaming of. TOUR DE PIZZA! 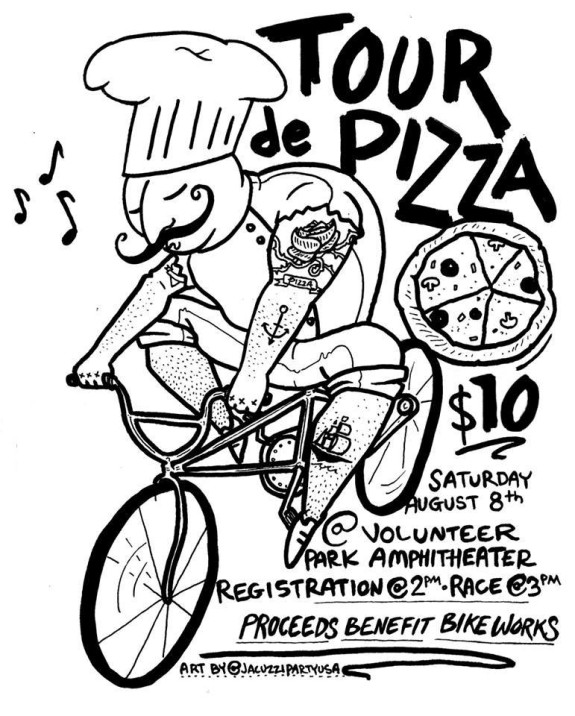 This entry was posted in news and tagged weekend guide. Bookmark the permalink.

9 Responses to Weekend Guide: Bike crazy, bike sexy and/or bike against the bomb