It’s not news that downtown streets are the scene of a huge number of serious traffic injuries and deaths. But this map at a recent open house still caught me completely off-guard. At first, I thought it was a map of the past ten years. How awful, so many lives ended or dramatically altered.

Then I read the title more carefully: Three years.

This is a public health emergency, and it’s been left largely untreated for decades. Every little asterisk, walking outline and cross represents a real person, someone’s friend or sister or grandfather. And as soon as I posted this map on Twitter, people started telling me how close they came to being a point on the map:

@seabikeblog I would have been a yellow dude at Alaskan and Seneca today, had I not been waving my arm like mad at a left-turner.

@RavennaBlog @seabikeblog Yikes. Same spot I nearly got pancaked by a truck today. Note that Alaskan already has the most bike spots on map.

@RavennaBlog @seabikeblog yeah. I was also almost a yellow dude this morning from a guy driving in the 2nd ave bike track @ Benoroya hall.

The map was on display and presented at an open house to discuss building a network of protected bike lanes downtown, which we wrote about previously.

The good news is that over 100 people showed up to the open house, and the crowd was overwhelmingly positive and supportive. I barely even heard murmurs of disapproval. In fact, the biggest complaint I heard over and over was: Why isn’t this moving faster?

Protected bike lanes, when done well, dramatically improve safety for all road users: People walking, people driving and, of course, people biking. So when we talk about creating a connected network of protected bike lanes downtown, we’re also talking about keeping a lot of crosses, asterisks and people outlines from making it on the next version of the map above. And that means keeping families together and friends alive.

An oft-cited case study from New York City (PDF), which has far more chaotic and busy streets than downtown Seattle, shows that two different Manhattan streets saw dramatic safety improvements after protected bike lanes were installed. Not only that, but businesses along those bike lanes saw big increases in retail sales far outpacing the area average: 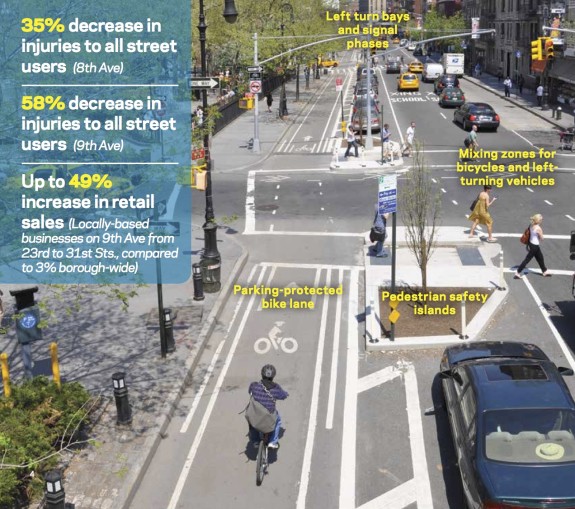 Which is why so many people at the open house were asking: No, really, I mean it, why aren’t we moving faster? 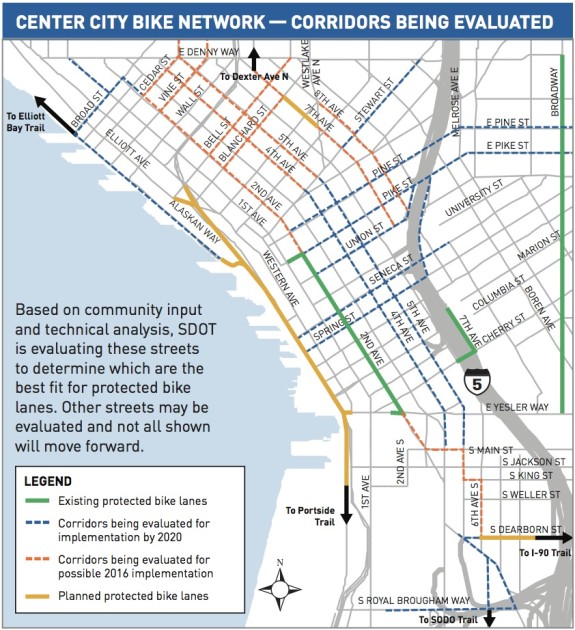 The City Center Bike Network routes will be narrowed down over the next couple months, and design on the 2016 routes will begin shortly. The rest of the network, will be built out by 2020, pending funding (in other words: Let’s pass the hell out of Move Seattle this November).

Critical links — like Pike/Pine to Capitol Hill but especially in the downtown core — aren’t slated for improvements until at least 2017. That’s a year later than was suggested in the most recent Bike Plan Plan update. We can’t wait two years for such a vital connection and safety gap (look at the cluster of injuries and deaths in the Pine-Pike-Union area west of I-5).

Of course, the bike network is not the only tool Seattle has for preventing serious injuries and deaths on downtown streets. As outlined in Mayor Ed Murray’s Vision Zero plan, the city will begin rolling out safety improvements downtown like a downtown-wide 25 mph speed limit, getting rid of dual turn lanes (deadly for people walking in crosswalks) and restrictions on turning right on a red light.

Meanwhile, a signal retiming project is an opportunity to calm the effective top speeds of people driving (green lights can be timed for, say, 15 or 20 mph), add time to the crosswalks (a big help to people who move slowly, either due to a mobility issue or age), and implement smart and easy biking and walking safety changes like Leading Pedestrian Intervals (an unsexy but very effective and easy change, see this video to learn why).

All this work, added together, should lead to a big decrease in how many neighbors and loved ones are sent to the hospital or the morgue just for walking, biking or driving downtown. And for the next little yellow person outline, it can’t happen soon enough.