Susie Dreher “was a uniquely joyful human from the moment she emerged,” according to a piece of writing no family should ever need to craft: An obituary for their two-year-old killed in traffic.

We offer her family our deepest condolences.

Susie was killed when she ran from a play area in the Redmond Town Center shopping area. A 25-year-old driving east on NE 75th Street struck her at the intersection of 164th Ave NE. Redmond Police said in a release that their “investigation reveals the driver did not have an opportunity to see the child or to stop in time.” 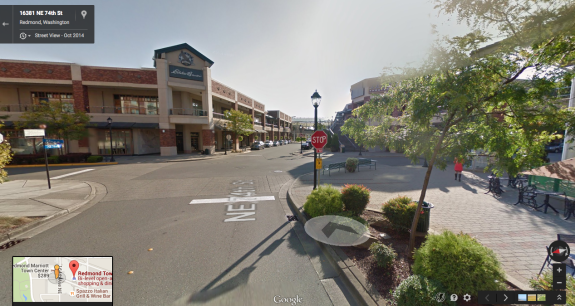 The intersection where the collision occurred, from Google Street View.

The tragedy came just days after a four-year-old was killed in an Issaquah crosswalk.

The deaths of toddlers are not acceptable costs for our current transportation system. Deaths and serious injuries in traffic are preventable.

Our youngest and oldest neighbors are the most vulnerable to the dangers of our traffic system. We’ve known this for a long time, yet we continue to delay in taking drastic action to invest in safety for people of all modes and all ages and abilities.

It’s long overdue for Eastside communities (and communities all around the state, for that matter) to adopt and fund Vision Zero goals. Just because Seattle has been so slow to adequately fund its traffic safety plans doesn’t mean other communities should delay, too.

We have the power to shape our streets and public spaces to put people and safety first. It’s time to community leaders to step up and use it. Children are dying. Susie and Haochen were not the first. And if we continue to do nothing, they won’t be the last.