FamilyRide: 20 families bike together to go camping on Bainbridge

EDITOR’S NOTE: Madi Carlson is Seattle Bike Blog’s Family Bike Expert and author of FamilyRide.us. Keep an eye out for her book, “Urban Cycling: How to get to work, save money, and use your bike for city living” available from Mountaineers Books in November. 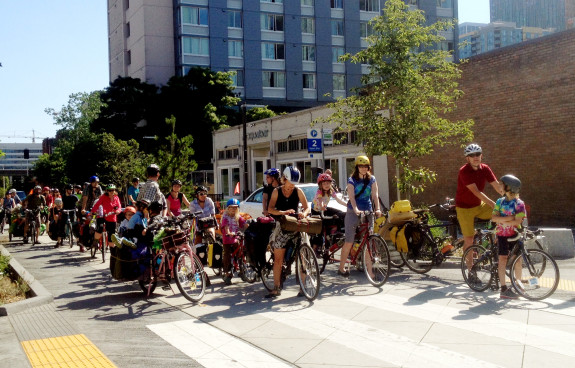 We took part in a huge, fun bike event this past weekend. No, not the annual Solstice Cyclists Painted Bike Ride (AKA the Fremont Solstice Naked Bike Ride), the other thing: Swift Campout. Masterminded by local pannier maker and Seattle Bike Blog sponsor Swift Industries, anyone and everyone all around the world was invited to create a bike overnight trip and invite friends.

I organized a trip for biking families to Fay Bainbridge Park, where we family bikers have previously held our annual late summer group bike camping trips. It’s also the closest place I know for people traveling with enormous bikes that can’t go on the bus or train but are welcome on the ferry. Five miles from Fremont to the Seattle Ferry Terminal, then seven miles from the Bainbridge Ferry Terminal to Fay Bainbridge Park, and you’re in paradise — driftwood-strewn beach, campsite playground, amazing view and the impression of being far from the city (even though you’re not). 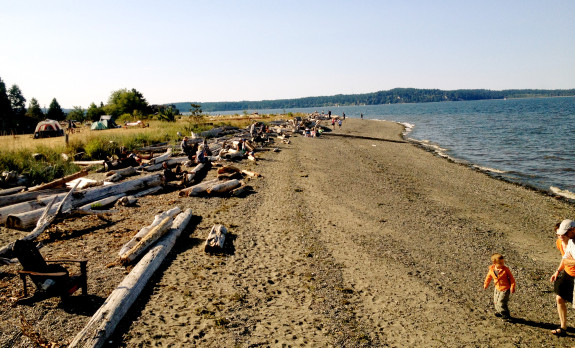 Our annual August trip is often timed to coincide with Bike for Pie, and it attracts a handful of families. I don’t know if it was the magic of solstice, the first weekend of summer break for Seattle Public Schools, or a need to fill the void after the Orange is the New Black season finale, but we had TWENTY FAMILIES on this trip: 65 people and two dogs! All on bikes. Carrying all our camping stuff. Carrying all the kids (except for one eight-year old who rode his own bike).

I would hazard a guess that we were the largest group for Swift Campout. I still can’t get over how many people were adventurous enough to come along. For regular bike camping, one can get by with a regular bike. But for family bike camping, many of us used cargo bikes, capable of carrying lots of stuff, like kids and camping gear. However, there were also bike trailers, trailer bikes (attached half-bikes kids sit on and pedal), adult/kid tandem bikes, and lots of gear stuffed in regular panniers. I should point out that we would not have seen quite as many people on our trip had it not been for the awesome Familybike Seattle Rental Fleet, four of which joined our trip (full disclosure: I’m on the board of Familybike Seattle). 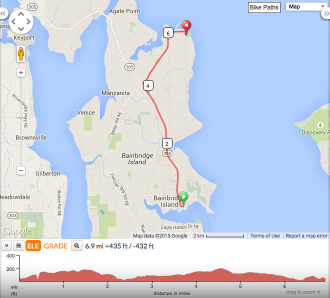 If you are interested in bike camping at Fay Bainbridge Park, this is the route we took. It utilizes the highway, which has very wide shoulders and is flat … for an island. Our previous group bike camping trips have all utilized the more scenic, but much hillier route that follows the Chilly Hilly and Bike for Pie routing.

Riding the ferry with a bike is fun and easy. Loading procedure varies from line to line, but for the Seattle-Bainbridge ferry you simply rides onto the boat, which is so fun. If you’re early enough, you get to load before the cars and park your bike at the front of the ferry, but if you’re part of a pack of 60 who doesn’t quite make the 20-minutes-prior-to-departure suggestion per the Bicycles on Washington State Ferries webpage, you nervously wait to see if there is room and then shout a million thank yous to the ferry employees as they allow you to squeeze in at the back and between the cars after everyone else has boarded. 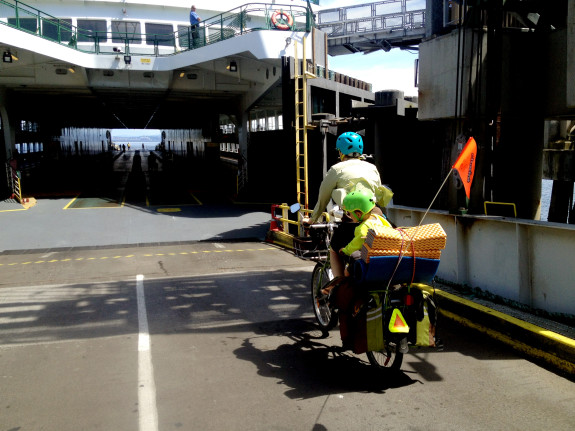 The campsite portion of the trip was just as fun as the biking part (what other modes of transportation can one say that for!): The kids set up an amazing sea life museum on the sand and played pirates on the biggest beach log while we pitched our tents to cello music (Yes, really, and transported by bike of course!). 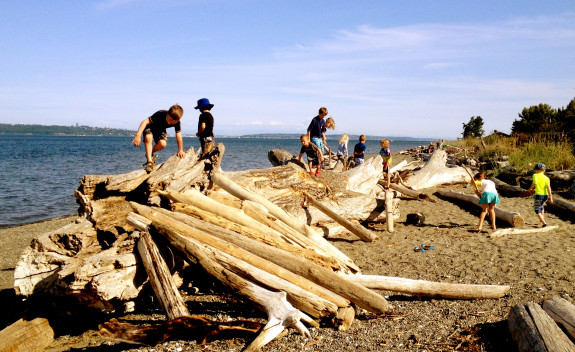 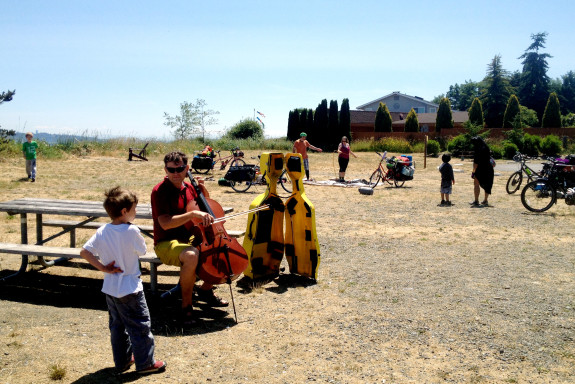 Cascade Bicycle Club’s new She Bikes Cascade program hosted a campout to Fay Bainbridge as well, and half their group wandered by to say a quick hello and were promptly trapped in the tractor beam of Elvis, the bike camping Schipperke, who rode over in a front bike basket and was the belle of the ball.

Then there was campfire, marshmallows, putting kids to sleep, more campfire, a not-too-early morning, and more biking for the return leg.

I always experience a bit of culture shock returning from bike camping, and this trip was no different. Our first jolt was when we encountered a car on the Elliott Bay Trail. Granted, the driver looked as bewildered as we must have. I see cars on the Burke-Gilman Trail quite often, but this was my first Elliott Bay Trail sighting. I hear it’s not uncommon, though. 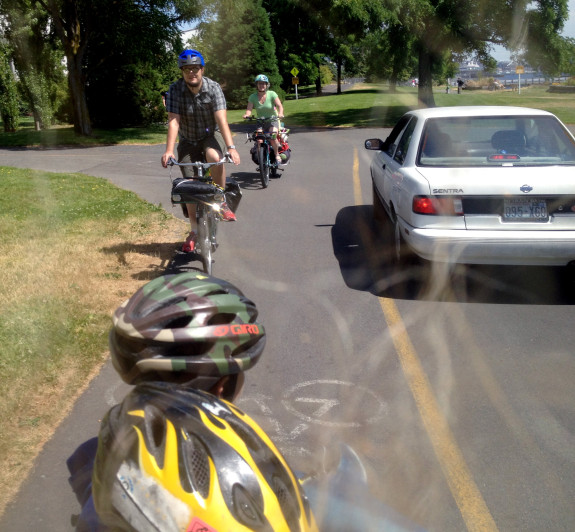 We detoured to Ballard with several of the families for a pit stop at Peddler Brewing Co because the new beer garden is very kid friendly with games, sidewalk chalk, and lots of room to run around. As we traversed the Missing Link, we saw the aftermath of a woman who broke her collar bone. (Note: here’s the longer, Missing-Link-avoiding route I used to get to Peddler’s Brewing for a recent Kidical Mass ride.) 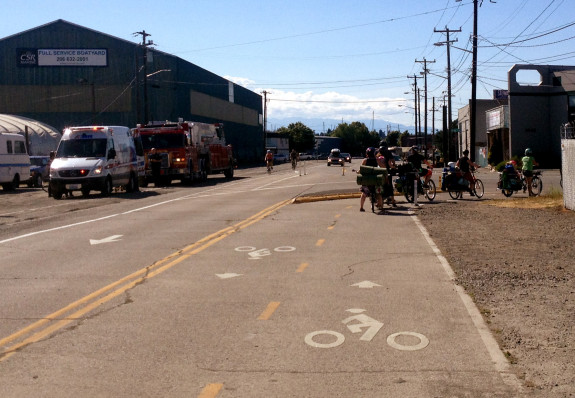 Now, the timing of the Swift Campout meant that we missed some, but not all, of the Fremont Solstice Fair. We walked our bikes (so hard with 200+ pounds of bike/kids/gear!) through a couple blocks of the Craft Market (and paused to watch a juggler) to reach the Burke-Gilman Trail. 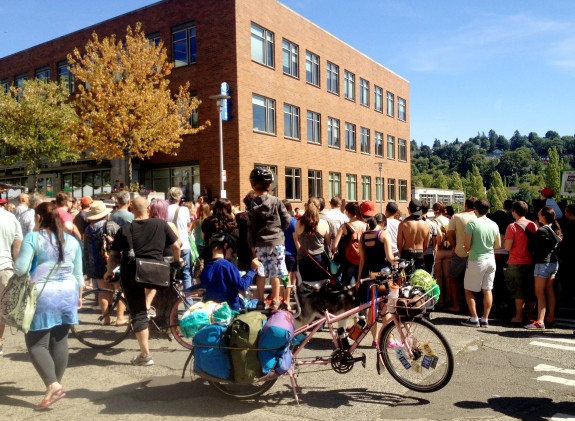 Then Ginger almost got doored — granted it was by someone exiting a porta-potty placed right at the edge of the Burke-Gilman Trail, and she stated the door opener was more startled than herself.

And finally, I came home to find a random bike in my cargo bike’s regular parking spot, doubtless from my next door neighbor’s annual naked bike ride body painting party.

Madi is Seattle Bike Blog’s Family Cycling Expert. She is the author of Urban Cycling: How to Get to Work, Save Money, and Use Your Bike for City Living. She lives in Wallingford and bikes all over town with her two kids in tow. You can read more of her adventures and thoughts on family life on two wheels at FamilyRide.us.
View all posts by Madi Carlson →
This entry was posted in news and tagged bainbridge island, familybike seattle, familyride, fay bainbridge park, madeleine carlson, swift campout. Bookmark the permalink.

11 Responses to FamilyRide: 20 families bike together to go camping on Bainbridge