EDITOR’S NOTE: Andres Salomon is a father and active member of NE Seattle Greenways, as well as an occasional contributor to Seattle Bike Blog. 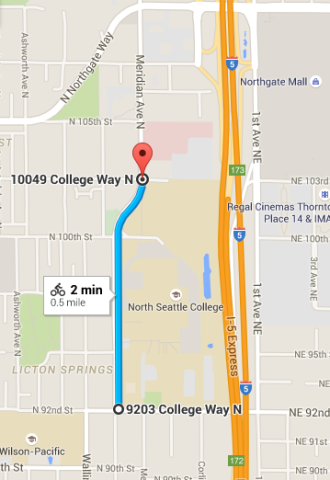 Seattle has just added a brand new protected bike lane to its repertoire.  Last month, the city finished up work on a half-mile stretch of bike lanes in North Seattle.  The segment, located on College Way N, helps connects a widely-used I-5 crossing, Wilson-Pacific Middle School, parts of Northgate, and runs alongside North Seattle Community College.  While there was previously a scary bike lane there (that I’d made fun of in the past), this represents a major upgrade to the safety of people biking on that corridor.

There are a number of interesting things about this project, but perhaps most interesting element is the fact that SDOT appears to have treated this as a maintenance upgrade rather than a major new bike project.

The corridor had received a bunch of pavement fixes last summer, and was due to be repainted. There was no public outreach or open house meetings that I’m aware of.  None of the people involved with Licton-Haller Greenways (including members of local neighborhood community councils and college employees) knew about the bike lane changes until painting had started.  There is no project website or link from SDOT’s PBL webpage.  The only hint that it was being planned was its inclusion in SDOT’s 2015 Bike Master Plan implementation plan (page 16 of this PDF). 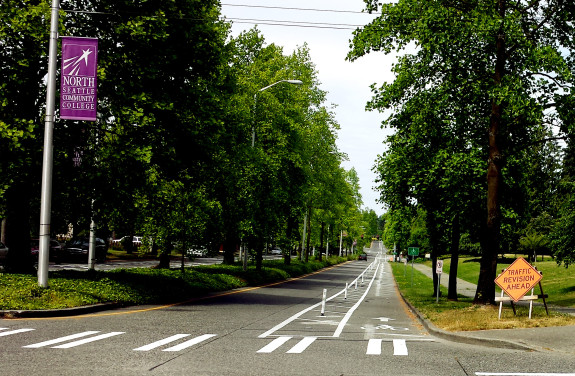 The start of the new protected bike lane at N 92nd St and College Way N. 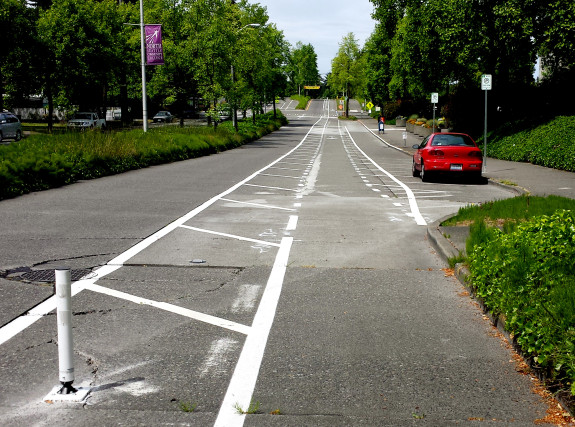 Here the plastic posts go away to allow for on-street parking. 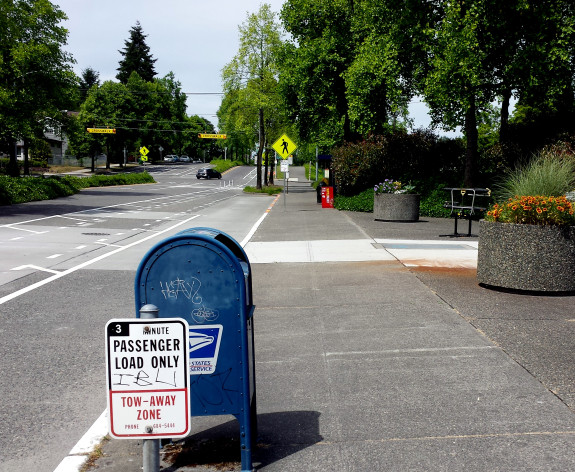 Stop and drop off your mail, smell the flowers, and practice loading your bike onto a bus with Metro’s practice rack!

Even though this wasn’t previously a door-zone bike lane, the quality of the pavement and proximity to speeding cars made it quite uncomfortable.  Not only has the pavement been improved, but attention seems to have been paid to where people on bikes would actually be riding.  Pavement seams in the old bike lane used to scare me when riding on skinny tires, for example. Kudos to SDOT for addressing those issues. 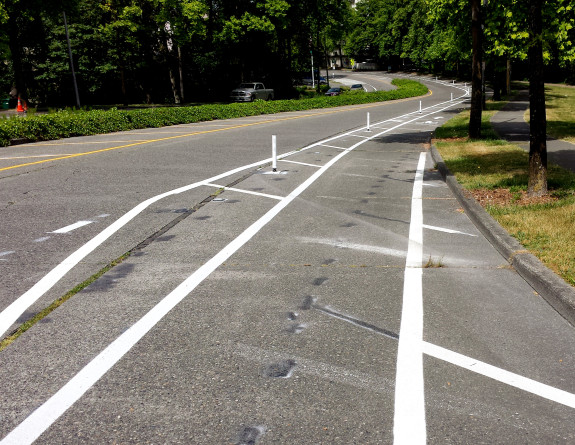 The current buffer is where the old bike lane used to be. Riders would have to pay special attention to the seam. It was also a problem when taking the lane. The new lanes avoid the seam completely. 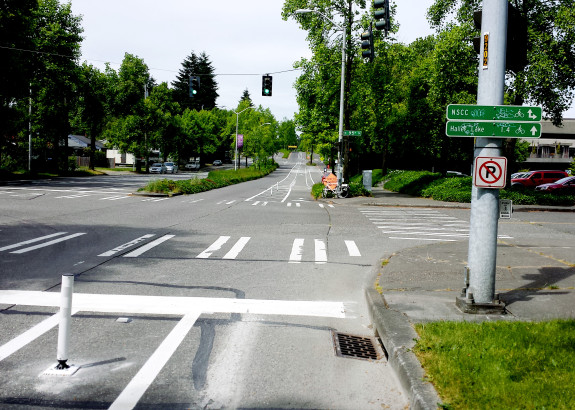 We can’t just drop protection at intersections and call it done. 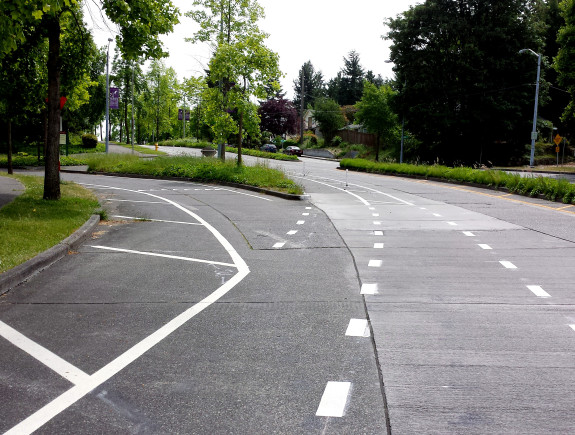 Slip lane of N 100th St. It’s 2015, why do we allow these bits of highway infrastructure on our city streets? 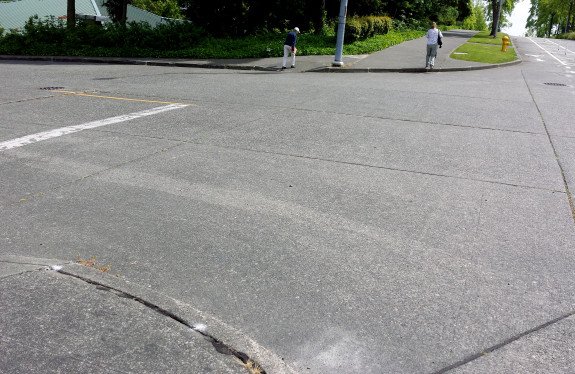 It took quite a while for the elderly gentleman to cross. Right-turning drivers can do so without slowing much here.

The bike lane on the west side of the street is not protected.  However, it has been upgraded to a buffered bike lane.  The new buffered bike lane begins at N 100th St, and is buffered on both sides of the lane.  As on the east side, parking is located between the bike lane and sidewalk.  I’m assuming that the bike lane was left unprotected due to the large number of driveways present.  While it’s a huge upgrade from the previous door-zone bike lanes, it seems like an obvious candidate for a left-side protected bike lane (similar to NE Ravenna Blvd). 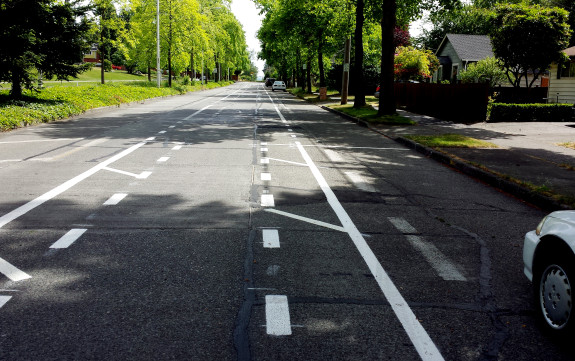 The unprotected (double-buffered) lane on the west side of College Way N, with lots of driveways. 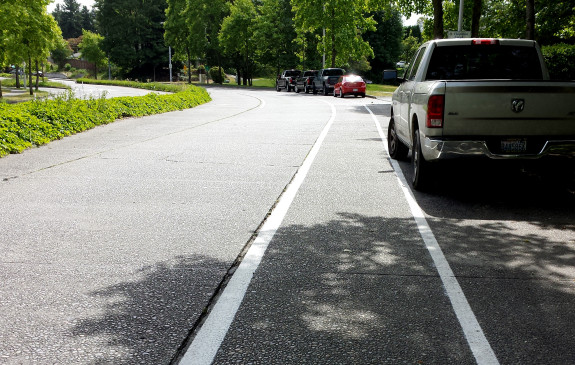 North of N 100th St, the old door-zone lane was repainted. The entire stretch used to be like this, only with worse pavement.

The city deserves praise for quickly upgrading bicycle facilities like this.  This used to be such a horrible ride (and still is, north of N 103rd St).  However, we need to make sure that they don’t consider these bicycle facilities complete until they feel (and actually are) safe and inviting.  Intersection improvements are not optional, and this corridor is an important connection. It must work for all ages and abilities.