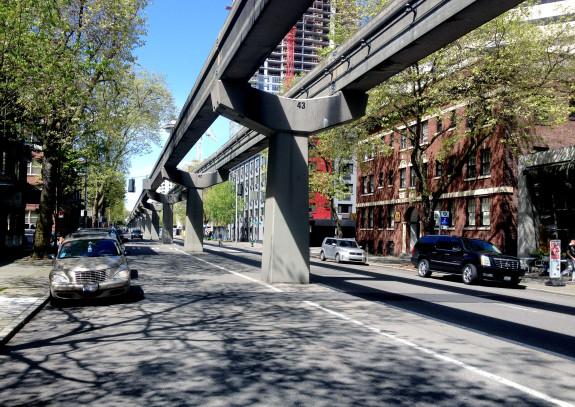 Here’s an idea that’s incredibly obvious and way overdue: Shift parking on 5th Ave underneath the monorail columns, then use the skinny lane to the west to create a fully protected bikeway and expand the neighborhood space.

Right now, the set-up of 5th Ave between McGraw Square and Seattle Center makes no sense whatsoever. From the west, there’s a lane of parking, one southbound lane, then a wide no man’s land where the monorail supports are, then two more southbound lanes, then another parking lane. You are not allowed to change lanes between the monorail columns because it’s insanely dangerous, but what if you need to turn? It’s bizarre and confusing. (UPDATE: Commenters have pointed out that it may not actually be illegal to change lanes under the monorail, despite the double white lines)

If you’re biking, it’s downright dangerous. Some people choose to bike in the single west lane, which leads impatient people driving behind them to make a dangerous lane change under the monorail to pass. Others choose the far east lane, which feels more like biking on the side of a highway than a city street. Many more people could not imagine themselves biking on 5th Ave at all.

And if you’re crossing the street on foot, you have quite a distance to cover to get from curb-to-curb. Plus you have to be careful that the monorail columns don’t hide you from someone driving.  Basically, the street doesn’t work for anyone (except maybe the monorail).

But it doesn’t need to be this way. Mike Lindblom at the Seattle Times reports on an idea floating around SDOT that would simplify the road, create a safe bikeway and expand public space. Because while this street is uncomfortable today, it could be one of the coolest streets in Belltown and one of the most unique streets in Seattle. I mean, it’s got a freaking monorail.

5th Ave could be a street that attracts people, offering space where people might actually want to hang out. The east-west Bell Street Park (despite its car problems) is nearly always full of people, who flock to its seats and tables to eat or hang out or just watch the world go by. This shows that the neighborhood is thirsty for more public space, and 5th Ave could build on that success by providing a connected and inviting public space experience north-south. And for a lot less money.

Parked cars would utilize the wasted space between the monorail columns and create a barrier to protect the new bikeway and public space. Businesses would have ample opportunities to spill out into the public realm through parklets and streateries. Imagine getting lunch at a curbside cafe next to a bikeway and monorail line, looking down the road at the Space Needle.

The distance people crossing 5th Ave need to cover would be cut by more than half, which would be especially great for people with mobility issues. And the two-way bikeway would fill a much-needed bike route connection through Belltown and between Lower Queen Anne and downtown.

Unfortunately, this idea isn’t happening tomorrow. In fact, we should see some other bike route changes in the area before the city gets to this one. But it’s an exciting, innovative concept that embraces what’s unique about Seattle and builds it into the people-focused space it should have been all along. Once complete, nobody will be able to imagine 5th Ave any other way.

“We are not very close yet,” said Chang.

Such a project would connect Seattle Center to McGraw Square Park, where the South Lake Union streetcar ends.

Neighborhood forums, City Council briefings, cost estimates, design studies and other accouterments of the Seattle Process aren’t yet scheduled, but the concept is circulating among bicycle advocates.

At least two changes are ahead of this one, Chang said: a route on Fifth connecting the new Mercer Street green lane to Denny Way; and a second phase of the new Second Avenue bike lane, linking Denny to the corner of Second and Pike Street.

Also, Amazon has agreed to fund two blocks of protected bikeway on Seventh Avenue next to its high-rise Rufus 2.0 campus.

81 Responses to Times: Innovative 5th Ave bikeway and public space in the works