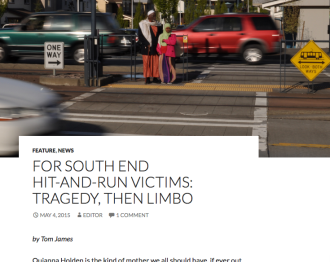 Screenshot from the South Seattle Emerald. Click to read the full story.

It’s hard enough to see the people you love most in the world suffer and fight to slowly recover from a serious injury they received just for walking across the street.

But as Tom James at the South Seattle Emerald reports this week, the pain is exacerbated when the person responsible flees the scene. Even with good clues (like locating the suspect vehicle), hit and run investigations are notoriously slow and often remain unsolved.

This powerful story is an absolute must-read from beginning to end. From the South Seattle Emerald:

Quianna Holden is the kind of mother we all should have, if ever out of the darkness evil comes to strike us down.

A little less than two years ago, on the way home from a late-night teen basketball program, Quianna’s son Trevon was struck and gravely injured by a hit-and-run driver while in a crosswalk on Martin Luther King Jr. Way.

In the hospital, after he came out of an 80-day coma, she used an alphabet board to ask if he could remember the face of the driver who hit him, and summoned police when he said he could.

When he finally came home from the hospital, seven months after he was hit but still only able to speak a few words and confined to a wheelchair, she moved into the dining room of the family’s South Seattle home, so that she could sleep on the same floor as him.

And when, by her account a year after the accident, she found out the police had stopped actively looking for the driver who hit her son, despite having found the vehicle, she kindled a righteous anger.

“I don’t want him to give up so I push him, and he pushes back,” she said. “And that’s what I want, because that lets me know that he’s fighting just as hard as I am.”

Trevon’s case is one of three hit-and-runs involving South Seattle residents where the investigations seem to have stalled. In all three, the cars were found soon after the crimes were committed, one with the owner still inside. In two, promises from the mayor’s office didn’t help – or were broken. And in all three, after a flurry of publicity, progress seemed to stop, and families described being left with little but questions.

This entry was posted in news and tagged hit and run, south seattle emerald, tom james. Bookmark the permalink.