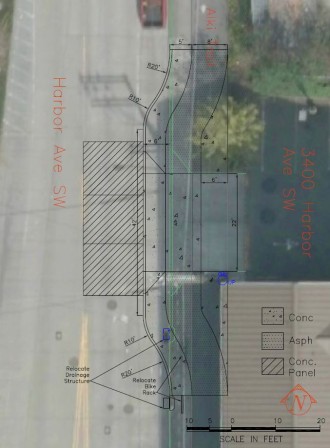 The Alki Trail is, in certain places, among Seattle’s greatest trails. But in other places, it’s among the worst.

One of the worst spots in the worst section of the trail (other than that one crazy intersection) is getting a facelift, though. A blind crossing in front of the ActivSpace parking lot on Harbor Ave SW will get some visibility improvements by shifting the trail and sidewalk into the street a few feet.

Work was scheduled to begin today. Expect detours for the next three weeks.

Unfortunately, this change is just a small fix to a bigger problem. The trail in this couple-block section is only eight feet wide (too skinny to meet modern standards), has utility poles in the way and runs directly in front of storefront doors. Basically, it’s a sidewalk that the city calls a trail.

Oddly, the Bicycle Master Plan considers this section to be a completed trail, which may have been an oversight because it definitely needs an upgrade. West Seattle Bike Connections has been pushing for improvements. Here’s what it looks like (image from 2009, but the design is essentially unchanged): 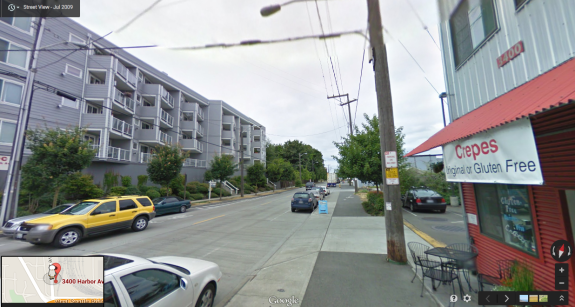 More details on the change, from SDOT:

Construction is scheduled to begin … April 28 and take up to three weeks to complete. Work will occur weekdays from 7 a.m. until 3 p.m. with pedestrians and bicyclists detoured away from the building into an adjacent temporary pathway currently used to provide on-street parking. A single general traffic lane in each direction will be maintained, although they lanes will be narrowed to accommodate the work zone and temporary trail through the area.  Access to building storefronts will also be maintained.