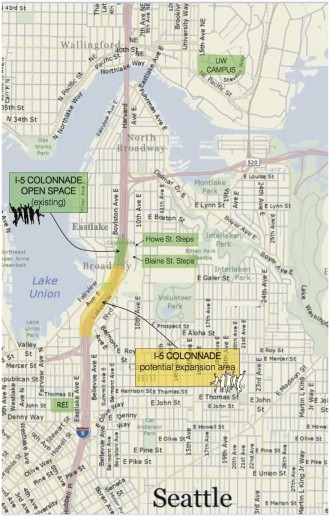 From the Eastlake Community Council

I-5 Colonnade urban mountain bike park is one of the city’s most unique public spaces. It’s a powerful reclaiming of a space destroyed by construction of the elevated I-5 structure separating Eastlake from Capitol Hill.

Ten years later, the community wants to revist the park, improve walk/bike connections through the area and even expand the park further south.

Because I-5 destroyed a whole lot of space in the neighborhood, and it’s about time we did what we can to reconnect as many of the places as we can.

Capitol Hill Seattle reported on the plans ahead of Thursday’s public meeting:

Opened in 2005, the Colonnade is now in need of some work and the Eastlake Community Council wants input on how the park should be improved and expanded. An introductory public meeting on the project will be held Thursday night at 6:30 PM at the Agora Conference Center.

Located under I-5 along Lakeview Blvd. E, the Colonnade includes an off-leash dog park, pedestrian walkways, and an award winning mountain bike park. The Eastlake Community Council, which was responsible for obtaining the initial funds to open the space in 2005, has already kicked around some ideas for improvements to the park: 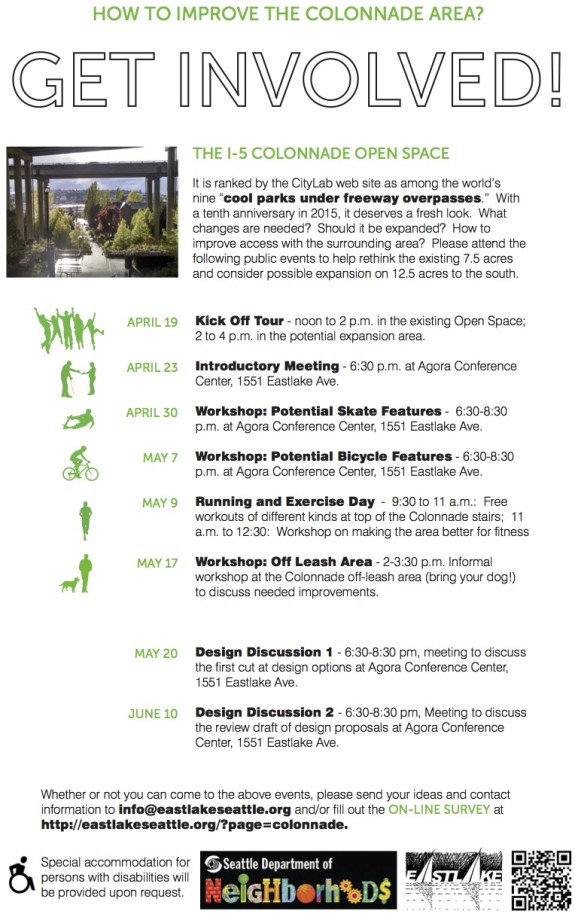 This entry was posted in news and tagged eastlake, eastlake community council, I-5 colonnade. Bookmark the permalink.

5 Responses to CHS: Eastlake community looks to improve and expand I-5 Colonnade Park