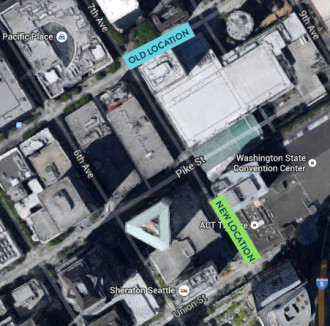 Construction at 7th and Pine has displaced Pronto Cycle Share’s fifth most popular station. You can now find it at 7th and Union in front of ACT Theatre.

While this move does put the station a little closer to the convention center, it moves it two blocks further from Westlake Station. Previously, it was the closest Pronto station to Westlake.

A month ago, Pronto moved Sher Kung Memorial Station at 2nd and University to 2nd and Spring at request of the Garden of Remembrance Board. This move added two extra blocks of walking from University Street Station.

While both of these moves have legitimate reasons, the city and Pronto need to make sure these major transit connections are as strong as possible. That’s why this tweet from Seattle Transit Blog is spot on:

I would love to see the @SeattleParks department would let @CyclePronto set up a station right in Westlake. cc @zachshan

Westlake Park (or Westlake Center’s plaza) is the perfect place for a Pronto station. It connects to both the transit tunnel and mayor Sound Transit buses, as well as being the closest thing Seattle has to a town square. I would bet a station here would immediately become the most popular station in the city.

But Seattle Parks has so far been resistant to citing Pronto stations in parks, a policy that needs to change.

In other Pronto station news, the return of the displaced station at Pine and Bellevue has been delayed again for “several more weeks.” I know Pronto was not expecting the station to be closed for this long, but it would be great if there were a policy in place to move stations to temporary locations nearby rather than remove them entirely. This station is pretty vital to connecting the downtown and Capitol Hill service areas, and the two closest stations are up or down significant hills.

This is a reminder that the #WomenWhoBike ride is today (Thursday). Meet at 7th and Bell by 5:30 p.m. to join these Seattle area bike leaders on a ride to City Hall:

Founder and Editor of Seattle Bike Blog.
View all posts by Tom Fucoloro →
This entry was posted in news and tagged parks and recreation, pronto emerald city cycle share, womenwhobike. Bookmark the permalink.