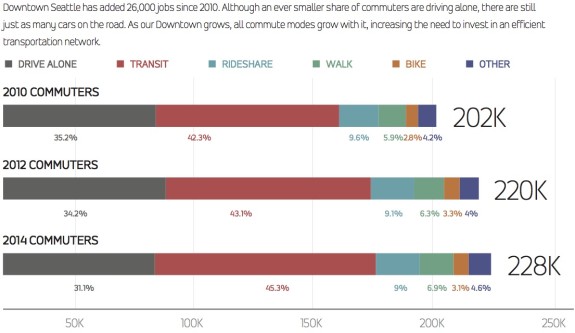 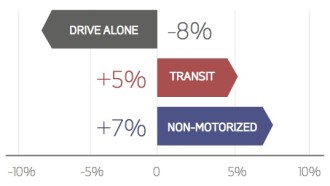 The most recent Downtown Seattle Association/Commute Seattle survey (PDF) of downtown commute habits shows that 69 percent of workers do not drive alone to their jobs.

Transit is by far the preferred way to get to downtown jobs, though walking, biking and telecommuting are also growing. Though the number of jobs downtown has been rising fast, the number of people driving alone to work has remained flat. People are getting to those new jobs using other means of transportation.

“As transit service continues to improve with Proposition 1 adding Metro service within Seattle, new Link light rail extensions on the way, and improved bicycle infrastructure, we expect these positive trends to continue,” Commute Seattle said in a press release.

There is one easy way to continue this trend: Connect neighborhood bike routes to and through downtown. Since 2010, bike commute rates are also fairly stagnant even as the number of people biking in other parts of the city increase dramatically. The Fremont Bridge bike counter has been measuring consistent increases in bike trips averaging 8.5 percent year-over-year. Yet these new bike trips are not making it all the way downtown, according to the survey. UPDATE: I learned that the mode split survey was taken in the final week of October 2014, which was exceptionally rainy. So weather likely played a role in the small apparent decrease in bicycle mode split. 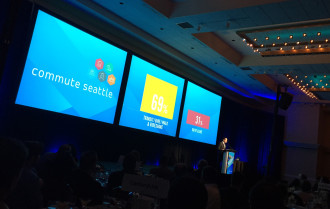 And it really should not be a huge surprise. Biking downtown is a very uncomfortable experience, and the city made very few investments to make it any easier between 2010 and 2014.

But that could be changing. The 2nd Ave protected bike lane opened in September, the first significant change in bike infrastructure downtown in many years. But the downtown core is still lacking comfortable connections to basically every neighborhood. There simply are only so many people who are eager to bike in a busy, congested traffic lane shared with people driving. In fact, it’s kind of amazing so many people do this today.

Planned bike lane connections on Pike and 7th Ave will help connect to existing bike routes in big sections of north Seattle and Capitol Hill, for example. Improvements to Dearborn planned this year will address one notoriously uncomfortable section of bike route heading into south Seattle. But there’s still a whole lot more work to do.

With walking to work growing quickly, the city also needs to invest in improving safety and comfort for people on foot. Downtown is by far the most dangerous place in the city to walk. As we reported previously, the city’s Vision Zero plan includes a focus on reducing speed limits to 25 mph and limiting right turns on red in areas with high numbers of people walking.

Retiming traffic signals to give people more time to cross on foot and slow everyone to a safer and more consistent pace could also help improve safety. And if traffic signals encourage a safer pace, biking on downtown streets that do not yet have protected bike lanes could feel a bit more comfortable.

More details on the downtown commute survey, from Commute Seattle:

The proportion of Downtown Seattle commuters driving alone to work has fallen to a new low.  According to a new Commute Seattle survey conducted by EMC Research[1], just 31 percent of Downtown’s estimated 228,000 daily commuters[2]drive alone to work, continuing a strong downward trend from 35 percent in 2010 and 34 percent in 2012.

These encouraging results show that Commute Seattle is approaching its goal of decreasing Downtown’s drive-alone rate to 30 percent by 2016.  Commute Seattle has focused its efforts for over ten years on Downtown businesses and property owners, helping them develop commute programs and incentives for their employees. As transit service continues to improve with Proposition 1 adding Metro service within Seattle, new Link light rail extensions on the way, and improved bicycle infrastructure, we expect these positive trends to continue.

Medium sized businesses (20-99 employees) led the way, reducing their drive-alone rate from 37 percent to 30 percent, nearly matching the 27 percent drive-alone rate among Downtown’s largest companies (100+ employees). “These results validate our strategic focus on Downtown small businesses,” said Commute Seattle Executive Director Jessica Szelag. “They reaffirm our commitment to ensure that the benefits of transit are shared by all commuters regardless of the size of their employer.”

Though the rate of driving alone declined, rapid job growth means that total traffic volumes are roughly equivalent to 2012, indicating a road network approaching full capacity. However, the overwhelming majority of new job growth is being accommodated by transit, walking, and bicycling.

“Downtown will only continue to grow and thrive if people can get here reliably, and Downtown businesses understand the need for faster, more reliable transit,” says Downtown Seattle Association President & CEO Jon Scholes. “We will continue to work to ensure that Downtown remains the region’s best place to live, work, shop, and play.”

“Seattle has great talent and the business climate to generate new jobs, but we must not let gridlock stifle that growth,” said Seattle Mayor Ed Murray. “We’re making the right investments and we must continue to provide the transportation choices that keep these trends moving in the right direction.”

“More commuters than ever are taking advantage of the reliable transit service we provide to Downtown Seattle,” said King County Executive Dow Constantine, who is also Chair of the Sound Transit Board of Directors. “Our region’s prosperity relies on people’s ability to get to and from work each day, so it’s critical that we build the transportation systems needed to keep up with our growing population.”