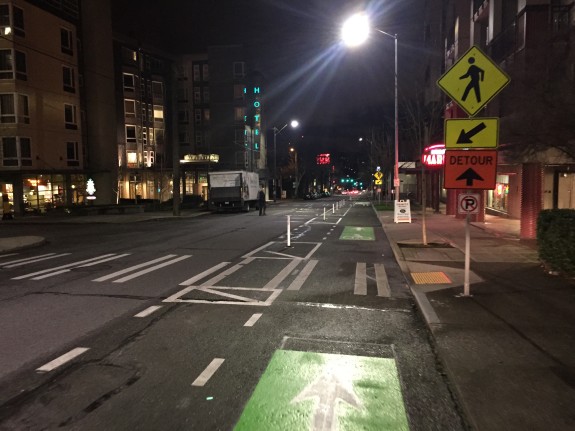 The interim protected bike lane is now open on Roosevelt Way between NE 45th Street and the north end of the University Bridge.

This project is something of a demonstration for what a more complete Roosevelt bike lane upgrade could look like after the street is repaved and redesigned starting fall 2015. The city plans to complete a protected bike lane on the vital NE Seattle bike route stretching from NE 65th Street to the south end of the University Bridge.

Not so long ago, there was no bike lane on the street, requiring some scary lane sharing on the long, fast downhill commute route. In 2010, the city painted a skinny bike lane on the street, but it was not enough to make the street safe. See our coverage from one of Seattle Bike Blog’s first ever stories, and note commenter John C pointing out some of the safety issues. Turns out, John C was right. The bike lane design created new safety issues, such as placing people too close to parked cars and at risk of getting hit by people opening their car doors.

Since the bike lane was installed, Roosevelt has remained one of the most dangerous streets for people biking in the city, clocking 21 collisions in just four years (October 2010 – October 2014).

The new bike lane design will separate people biking from car traffic and create a much more comfortable and inviting space to bike. It will also remove conflicts with transit by moving bus stops off the sidewalk and into the space between the general travel lanes and the bike lane, much like the Dexter Ave transit islands. You can learn more about the changes from our previous story.

Much of the interim protected bike lane is pretty great, demonstrating a dramatic change in comfort for what was previously a scary place to bike. But larger issues remain problematic. The final product after repaving will create a complete connection to the University Bridge bike lanes, but the interim bike lane spits people into a shared traffic lane right before the bridge. With people driving and biking both getting up some quick speed before getting to the merge point, it does not feel safe at all.

Without a planned transit island and loading space near the UW Medical Clinic, shuttles and buses will still load across the bike lane. So in the meantime, be prepared to slow down and be careful.

Have you tried out the interim lane yet? Let us know how it went in the comments below. Here’s the press release from SDOT:

The Seattle Department of Transportation (SDOT) today opened a new interim protected bike lane along the west side of Roosevelt Way NE between NE 45th Street and the University Bridge. Protected bike lanes physically separate people riding bikes from people driving and are distinct from the sidewalk, adding predictability. Protected bike lanes are especially attractive to people who might be willing to bicycle but are concerned about safely biking on arterial roadways

“This is a critical location for a protected bike lane,” stated Seattle Department of Transportation Director Scott Kubly. “Through collaboration with the Roosevelt Way community, we have been able to quickly install this interim bike lane well in advance of the repaving project’s permanent improvements.”
Between October 2010 and October 2014, 21 collisions involving people riding bikes have occurred on this corridor. The new facility will enhance safety through a seven-foot-wide lane with a five-foot buffer that includes white posts. Driving or parking in the new bike lane is not allowed and temporary “No Parking” signs will remain in place until permanent signs and remaining green bike boxes are installed.

In fall 2015, SDOT will start repaving Roosevelt Way NE and add important safety improvements from Fuhrman Avenue NE to NE 65th Street. Along with addressing basic maintenance needs, SDOT is creating a multi-modal corridor by: improving transit reliability through transit stop consolidation and the addition of in-lane stops (pending funding availability); repairing sidewalks and adding curb bulbs and wheelchair ramps; and making bicycling safer and more comfortable. The two existing general purpose lanes will remain, as well as on-street parking on the east side. These changes will make Roosevelt feel more like a neighborhood business street and less like an alternative to I-5.

The paving project will also improve the bike connection from Roosevelt on to the University Bridge by adjusting the medians between northbound and southbound Roosevelt to accommodate existing travel lanes and a continuous permanent bicycle lane. An in-lane bus stop and passenger load zone at the U.W. Medical Clinic will be constructed in a way that meets the needs of transit riders, medical clinic patients and people riding bikes. The permanent bike facility’s buffer will be reduced to four feet wide along the corridor, adding an extra foot to the east side parking lane.

Outreach is underway to residents and businesses along Roosevelt Way NE to understand their access needs and determine how they can continue to be met during construction and with the addition of a one-way protected bike lane. In addition to door-to–door outreach, one last drop-in sessions is scheduled today from 5:30 – 7 p.m. at University Heights, 5031 University Way NE.

For more information on the project please visit www.seattle.gov/transportation/pave_roosevelt.htm.

This entry was posted in news and tagged protected bike lanes, roosevelt. Bookmark the permalink.