Watching Seahawks defensive end Michael Bennett borrow an SPD bicycle and cruise around the field after the craziest comeback win in recent memory was pretty much the best thing ever. Bennett’s jubilant cruise around the field was televised to stunned football fans across the country, many of them probably still staring at their TVs in disbelief.

Bennett told the Seahawks PR office that he bikes all the time, but this ride was special:

Shortly after Seattle quarterback Russell Wilson connected with wide receiver Jermaine Kearse for the game-winning 35-yard score, the Seahawks defensive end borrowed a bicycle from a member of the Seattle Police Department who was working security at field level and took it for a victory lap on the CenturyLink Field turf.

“I took it from the cop and just rode it around the stadium,” Bennett said in the locker room following his team’s 28-22 overtime win against the Green Bay Packers that ensures the Seahawks a shot at defending last year’s Super Bowl title. “I bike all the time. I’m a real biker. I’ve got three bikes at my house, so I was just having fun.

“Best bike ride I’ve ever had.”

But one young Packers fan had a very different reaction to watching the bike ride:

I’ve never seen anyone so sad to watch someone else ride a bike.

The video caught the attention of local coffee company Voxx Coffee, who got in touch with the boy’s mother and offered to buy him a new bike as something of a consolation prize (the bike is in the mail, says Voxx).

UPDATE: Thanks to Ravenna Blog for pointing out that you can now buy a t-shirt commemorating this joyride: 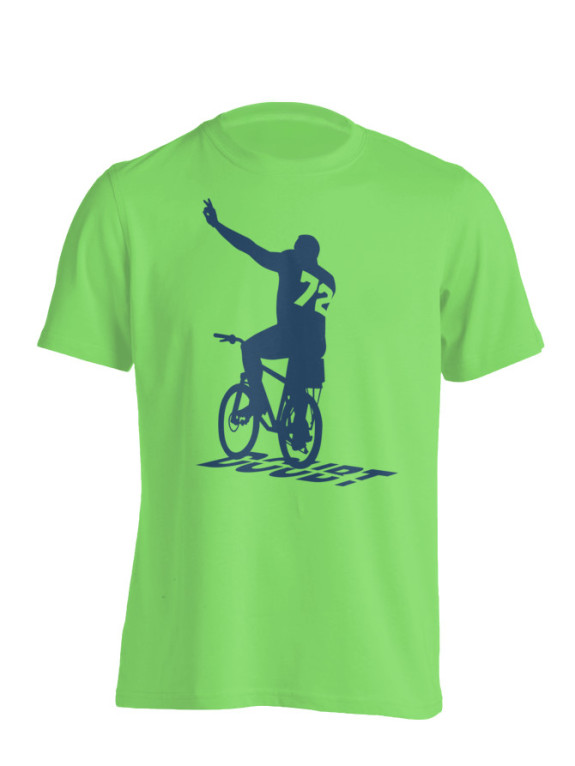 This entry was posted in news and tagged seahawks, voxx coffee. Bookmark the permalink.