How you can help cycling patriot Alvin, who was assaulted last week 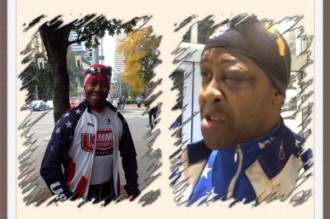 Image from the GoFundMe page.

As we reported last week, Seattle’s iconic biking patriot Alvin Graham Jr was assaulted outside the Seahawks/Panthers game. Like at so many major sporting and community events, Alvin was riding his bike on a stationary trainer to raise money for veterans’ and their families.

According to Facebook posts, he is having surgery for broken bones in his face after a man in a Seahawks jersey punched him.

You can help him get back on his feet (and back on his USA-themed bike) by tossing some cash his way via this GoFundMe site. There was some confusion about a previous GoFundMe set up by a friend, who told me she jumped the gun a bit when she heard what happened to him. The current page was set up by a family member of Alvin’s.

Get well soon, Alvin! Here’s a Q13 report with more details on what happened:

This entry was posted in news and tagged alvin graham jr. Bookmark the permalink.

4 Responses to How you can help cycling patriot Alvin, who was assaulted last week