City leaders step up to make safety a priority on Roosevelt, here’s how to thank them 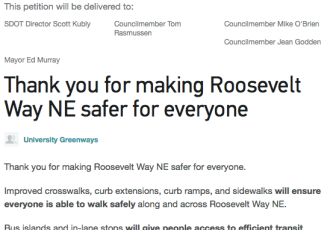 Neighbors of Roosevelt Way and safe streets advocates were trying to figure out the best strategy to convince city leaders to include bike lane upgrades as part of an upcoming repaving project when something awesome happened: The city announced that they now plan to build protected bike lanes for the entire length of the project, stretching from NE 65th Street to the University Bridge.

This is a smart call, taking advantage of the paving project to build out a key piece of the Bicycle Master Plan at a much lower-than-anticipated cost. It also demonstrates that the city is taking the Bike Plan and the 2007 Complete Streets Ordinance seriously. You can read more about the project in our previous story.

So University Greenways has put together a thank you letter for city leaders, and is asking folks to sign it, noting that “critical safety upgrades to the existing bicycle facility will transform Roosevelt Way NE from one of the most dangerous streets for people biking to one of Seattle’s safest.”

And, of course, you should go to at least one of the city’s upcoming open houses to support the project and give feedback on the plans (they are drop-in sessions, so no need to be there the entire time):

7 Responses to City leaders step up to make safety a priority on Roosevelt, here’s how to thank them