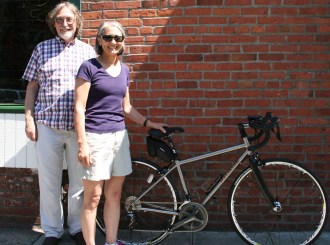 Davidson stands in front of his former shop at Elliot Bay Bicycles with a happy customer. Image from Davidson Cycles.

When Elliott Bay Bicycles closed in late September after 31 years, owners of Seattle-made Davidson bikes wondered what would happen to the storied bike maker’s shop. Now we know: Bill Davidson is teaming up with Maxwell Kullaway of 333fab to open a new custom bike fabrication shop in Fremont.

Davidson & Kullaway Custom Bicycles is scheduled to open early next year at 35th and Stone Way, just a half block from the Fremont Recycled Cycles location and a block from the Burke-Gilman Trail.

In addition to being a fabrication shop, there will also be a showroom. It’s sure to become an instant destination for anyone in the market for a custom, locally-made bike. It’s also further evidence that Fremont is still the bicycle capitol of Seattle.

More details from a press release about the partnership:

Bill Davidson of Davidson Cycles and Maxwell Kullaway of 333fab are excited to announce the opening of their new shop, Davidson & Kullaway Custom Bicycles.  Slated to open in early 2015, the shop will be located on 3425 Stone Way N in the Fremont/Wallingford neighborhood of Seattle.  With a focus on offering complete custom bicycles, the shop is set to include a showroom, service area and a fabrication space.

A bike-building legend, Bill Davidson is a pioneer of the bicycling industry in Seattle, and has been building ‘Davidsons’ since the early 1970s.  He and his former partner, Bob Freeman, recently closed their long-running shop, Elliott Bay Bicycles, so that Davidson could refocus on bike design and fabrication.

“What really motivates me is creating the perfect bicycles for my customers,” said Davidson. “With the new shop, things will be simplified and we’ll be focused on just that:  creating great bikes.”

With a background in the visual arts, Kullaway has welded more than 3,000 titanium and steel custom bicycle frames since 1993 for companies such as Merlin and Seven Cycles. Kullaway has grown a loyal following since starting the 333fab brand in 2008 and is known and for his attention to detail, TIG welding skills, cyclocross racing prowess and his distinctive laugh.

Kullaway has welded Davidson’s Titanium frames since 2006 and served as the framebuilder for the Hampsten brand since 2008 while he worked to get the 333fab brand off the ground.

“Max is a great metal fabricator and an expert TIG welder,” said Davidson. “I’ve been impressed with his craftsmanship and he’s just a great guy to be around.  I knew I wanted him to be a part of my next new venture.”

For Kullaway, this joint-venture is a “huge honor.”
“Bill is a legend.  There is so much I can learn from him and we already know that we work really well together. This partnership just makes sense,” Kullaway said.

Davidson & Kullaway Custom Bicycles will open to the public and serve a custom-only clientele starting in early 2015.   It will be ideally situated a block and a half from the Burke-Gilman Trail next to the new location of Recycled Cycles and popular watering hole, The Pacific Inn.  Longtime mechanic from Elliott Bay Bicycles, Mark Villegas will round out the team at Davidson & Kullaway, providing his professional repair services.

Stay tuned for opening dates and a launch party at www.333fab.com or www.davidsonbicycles.com

Here’s a cool video behind the scenes with Kullaway:

The Builder – Max Kullaway from Loaded Pictures on Vimeo.