The crisis of traffic violence in our region continues to maim and kill our neighbors, coworkers and loved ones. Here’s a quick and sadly far-from-complete look at some recent tragedies. Sadly, every victim in this post is over the age of 60, furthering the terrible rule that traffic violence impacts seniors disproportionately.

Every one of these victims have families and friends who love them, and even those not killed have long, tough recoveries ahead of them. The fact that this post only scrapes the surface of all the traffic injuries and deaths in the area shows just how much of a public health crisis traffic violence is. 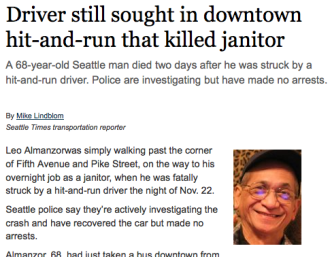 Leo Almanzor was walking to his night shift as a janitor at Washington Athletic Club November 22 when a person apparently fleeing a traffic stop struck and killed him. The person responsible fled the scene.

It’s not yet clear whether Almanzor was in a crosswalk or on the sidewalk when he was killed. Police told his family the person driving ran a red light, but a witness said the car went up onto the sidewalk at one point. But either way, a “a very selfless man” who was “dedicated and giving” is now dead.

“The family is frustrated at this point, because whoever this person is who took his life, took so much from us,” Almanzor’s niece Cat Kalepo told the Seattle Times.

Police have recovered the vehicle, but no arrests have been made. More details from the Seattle Times:

Almanzor, 68, had just taken a bus downtown from his home in the Columbia City neighborhood and likely had stopped for a cup of coffee just before his 9:30 p.m. shift at the Washington Athletic Club, a job he had held for 17 years, according to his niece, Cat Kalepo.

At about the same time, police were trying to to pull over a Honda sedan on Fifth Avenue, but the car sped off and hit Almanzor, said Seattle Police spokesman Drew Fowler.

Puyallup pastor critically injured while biking near the fair grounds

A Puyallup pastor Eric Renz was critically injured when an allegedly impaired woman blew a stop sign and hit him while he was biking near the fairgrounds.

Kallie James has been charged with vehicular assault and held on $250,000 bail. Police say she was clearly intoxicated, and she told police she could not feel the pedals, according to charging documents.

KOMO reports that Renz had just finished preparing food at one homeless services location and was biking to another to help out there when James struck him. His injuries were severe, and he was put on a ventilator at St Joseph’s Hospital.

More details on the case against James from court documents: 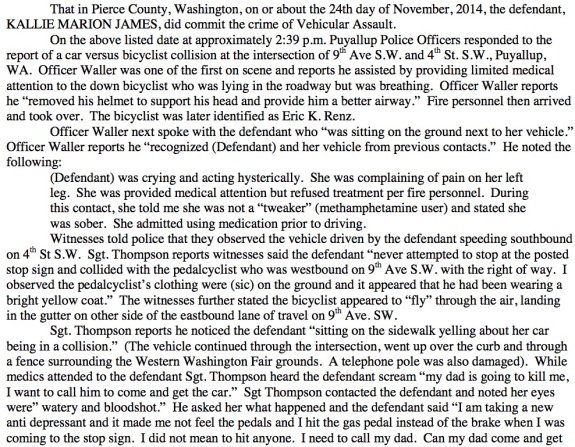 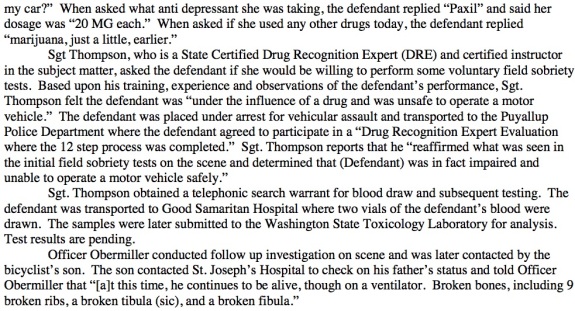 Renz recently ran as a Democrat for a seat in the Washington State House of Representatives, but lost to the Republican incumbent Hans Zeiger. When asked whether he would support an increase in the gas tax, Renz told the News Tribune yes, and that the funds should go towards increasing transit and biking projects: 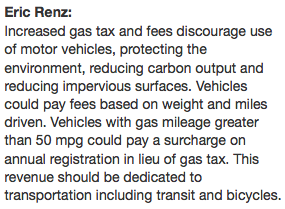 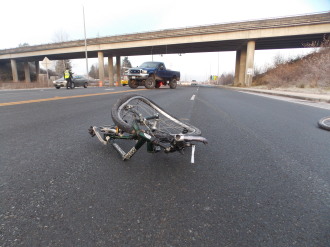 A man biking on SR 2 near the interchange with Hwy 522 in Monroe was struck and critically injured Wedensday morning.

Richard Pratt, 63, was biking in the right lane when a 19-year-old driving a pickup apparently tried to merge and struck him KIRO TV reports.

A 77-year-old woman walking in Bellevue was struck and killed Monday by an 18-year-old man driving with icy car windows.

A second person may have struck her while she was on the ground after going around the 18-year-old’s stopped Jeep, then merging back into the right lane where she was lying in the street. The second suspect did not stop, but was later located.

Even though the person driving who struck her chose to drive with icy windows and not properly look to people walking before making a turn, Bellevue PD’s Seth Tyler still went out of his way to place blame on the victim by telling KOMO her dark clothing was a possible factor in her being killed:

Police are still investigating the crash, but said Monday evening it appears icy car windows that were not fully defrosted and failing to look right for pedestrians were factors in the crash. The accident happened as the Jeep driver was making a right-hand turn onto 150th Avenue.

Tyler said the victim’s dark clothing may also have been a factor in the pre-dawn crash.

This is disgusting, victim-blaming behavior from Tyler and Bellevue PD. Walking while wearing dark-colors is not a crime.

UPDATE: Tyler left a comment on this story explaining why he mentioned the dark clothing. Read it here.