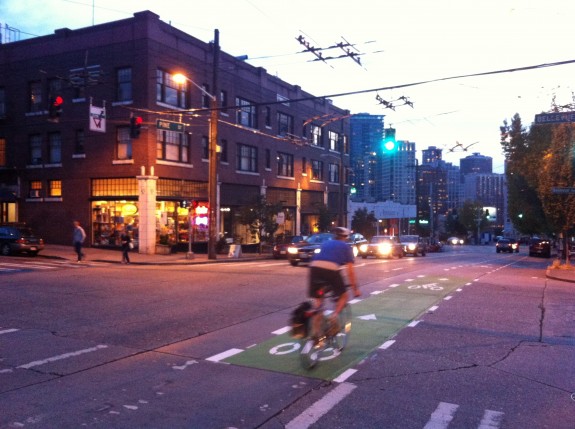 A few years ago, the city added green paint and signage to try to cut down on all the right hook collisions at this Pine Street intersection. But the essential problems remain. 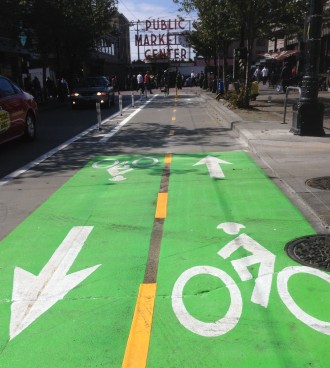 There is another way. Here’s Pike Street downtown today (for one block)

You don’t have to bike for very long in Seattle before you figure out the most dangerous kind of street: “Downhill streets with on-street parking and turning movements at intersections: Those are problems that Second Ave had,” Cascade Bicycle Club’s Advocacy Director Jeff Aken explained recently to Josh Cohen at Crosscut. “Cyclists get moving pretty good on those streets and without separation and visibility, it can be sketchy. You pay a heavy price for mistakes.”

And as the redesigned 2nd Ave bike lane shows us, it doesn’t need to be that way. These streets can be designed to be safer and more comfortable. That includes this list of familiar white knuckle bike routes Cohen found during his research:

From 2007 to August 2014, Second had 60 bike-car collisions and one fatality. But the city has many other problem spots. In that same period, Pine Street from 12th to First Avenue had 94 bike and car collisions. Roosevelt Way between 70th Street and the University Bridge had at least 63. There were 50 collisions [on Jackson] between 23rd Avenue in the Central District and First Avenue in Pioneer Square.

There are other problem spots, too: Rainier Avenue S.; the Ballard Bridge and the nearby “missing link” section of the Burke-Gilman Trail; the vexing five-way intersection under the West Seattle Bridge; Pike and Boren, among others.

The list could easily go on from there. But where once people seemed resigned to just throw their hands up in the air and give up, the success of 2nd Ave has shown that there is another way. And now we don’t need to fly to Copenhagen (or take the train to Vancouver) to see it for ourselves. It’s right in our own downtown.

The city is in the process of hiring a planning firm to handle design of the Center City Bike Network, which will move design on other needed bike lanes like 4th Ave, 7th Ave and some much-needed east-west corridors like Pike/Pine. Construction is currently planned for 2016 if all goes according to schedule. Though, as we have noted before, the city should look for opportunities to accelerate some of the most-needed connections, like on Pike Street.