Someone keeps stealing from Bike Works, so now they’re low on BMX bikes 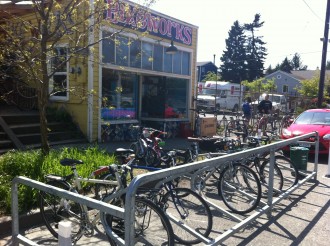 Unfortunately, some person (or persons) missing a moral compass has been hitting Bike Works hard this past week, stealing as many as 20 bikes that young bike repair students had put their hearts into fixing to get them ready to be given to other kids whose families are unable to easily afford a new bike.

“Break-ins like this make it that much harder to get bikes to youth who really need them,” said Bike Works Executive Director Deb Salls in a press release.

Many of those stolen were BMX bikes, which are pretty much the coolest and most in-demand kind of bike a kid can have. So if you have a BMX ride sitting around that you can spare (or if you’ve been looking for an excuse to upgrade), now would be a great time to bring it down to Bike Works at Ferdinand and Rainier in Columbia City.

Bike Works, a nonprofit in Columbia City whose mission is to build sustainable communities by educating youth and promoting bicycling, has been on the unfortunate receiving end of a series of bike thefts this past week.

It’s estimated that between 15 and 20 bikes have been stolen—many of them BMX bikes that were fixed by youth learning bike repair through Bike Works’ classes and programs. These bikes were destined to be given to other young people in need of a bike but without a means to obtain one.

“These recent thefts of bikes from Bike Works are very unfortunate, because the bikes are a necessary element of our programming. Break-ins like this make it that much harder to get bikes to youth who really need them. We’re so grateful for all the bikes donated to us each year by our amazing supporters. To anyone who’s got an extra bike that’s no longer being used—please consider donating it to Bike Works. We’ll make sure to put them to good use as learning tools in our programs, and back out into the community,” said Bike Works’ Executive Director, Deb Salls.

Bike Works uses bicycles as a means to empower individuals through active transportation. Programs are run using entirely recycled bicycles that are first donated to the organization by community members. While Bike Works accepts bike donations year round, they are in particular need of kids BMX bikes to meet the demands of fall programming.

If you are interested in donating a bike to Bike Works, you can drop off your donation at the Bike Works Bike Shop during shop hours. To learn more about other ways to donate bikes, bike parts, and accessories to Bike Works, visit http://bikeworks.org/bicycle-donations/

Founder and Editor of Seattle Bike Blog.
View all posts by Tom Fucoloro →
This entry was posted in news and tagged bike thefts, bike works. Bookmark the permalink.

5 Responses to Someone keeps stealing from Bike Works, so now they’re low on BMX bikes