King 5 has been pressing Seattle PD on the issue of enforcing traffic laws on people who bike and has a report out this morning saying that recent SPD bike law efforts are switching from giving out warnings to giving out tickets.

We here at Seattle Bike Blog are totally in favor of reasonable and safety-focused bike law enforcement. For example, with the new protected bike lanes on 2nd it is important that people obey the new bike traffic signals. Most do, but there are always some people who don’t (as is true for all modes of transportation). And that’s where enforcement is useful.

Another example is yielding to people walking. While people driving are still much, much, much more likely to injure or kill someone on foot, this is one of the few situations where someone biking can seriously hurt someone else. It is very rare, but as this week’s terrible incident in New York’s Central Park shows, it can and does happen.

So it was good to hear from Detective Patrick Michaud that safety around people walking is their top priority in the enforcement efforts. From King 5:

“The majority of bicyclists do follow the rules, and just like drivers, there are the few that do break the law,” said Det. Patrick Michaud of the Seattle Police Department.

“We want to reinforce that it’s everybody’s duty to be out there using the roads safely,” said Michaud. “The thing that we’re most worried about [are] the pedestrians.”

However, the King 5 report troublingly also lists a series of supposed infractions that are not against the law (or at least not always), such as:

I hope that these mistakes were made by King 5 and not the Seattle PD, who should know these basic bike laws. I also hope King 5 corrects these errors.

Beyond these not-laws, there are some laws that do not actually affect the safety of others, such as “riding without a helmet.” While it is true that it is against health regulations for an adult to bike without a helmet in King County, it’s also true that we are one of very few big cities in the entire world that even has this law. And no, we aren’t ahead of the curve. If anything, cities around the globe that did have all-ages helmet laws are repealing them (or making them only apply under 18) in order to help bike share systems succeed.

It is simply not wise nor beneficial to public safety to spend precious police enforcement time going after people who aren’t wearing a helmet while they ride a bike. This will be especially true when Pronto Cycle Share launches next month, since short, spontaneous trips are important to the success of the system. Sometimes that means people will choose to forgo a bike helmet for their short and simple trips. Bike share systems have an astoundingly safe track record in places where few people wear helmets. In fact, after 23 million rides on bike share systems all over the US, zero people have died. Seattle will be the first major US city to launch a bike share system with a helmet law still on the books.

We have suggested that if the city/county does not repeal the helmet law or change it to only apply to people under 18, they could at least change it to be a secondary offense. If someone without a helmet is breaking more important traffic laws like blowing through red lights or endangering people using crosswalks, then sure, they can get a double ticket. But if their only offense is not using a helmet, stopping them and giving them a ticket is not a valuable use of officer or traffic court time.

And as should always guide traffic enforcement efforts, police should focus on the kinds of law breaking that injures and kills people most often. Some effort to reign in the most egregious biking law breakers certainly is worthwhile, but by far the biggest bearers of injury and death on Seattle streets are sitting behind car steering wheels. This is not because people who drive are worse people than those who bike or anything like that. It’s simply because their vehicles are much larger and heavier. With more potential for damage comes more responsibility for the safety of those around you. 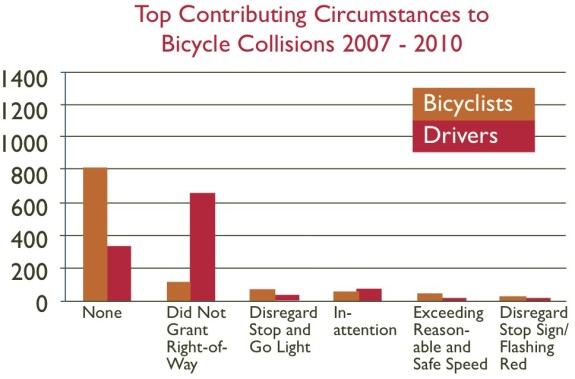 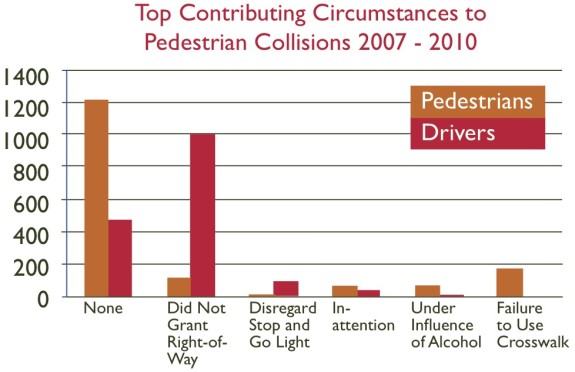 Unfortunately, Seattle PD has had a history of ticketing exactly the wrong people:

So I hope these bicycle enforcement issues are guided by the right principles and are carried out along with significant efforts to curb dangerous behavior by people driving.

We all want the same things: A city that is safer for everyone. We’ll only get there if we stay focused on the biggest dangers.

This entry was posted in news and tagged helmet laws, king 5, spd. Bookmark the permalink.