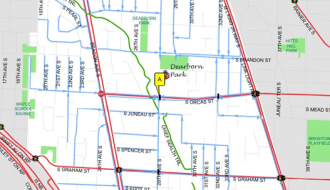 Just one of many walking route maps for Seattle schools

After such terribly sad news like the death of Sher Kung on 2nd Ave last week, it’s perhaps more important than ever to look at road safety programs in Seattle that truly work at preventing traffic deaths and injuries. And there may not be a better example than the city’s fantastically-successful Safe Routes to School program.

In just a couple years, the program has been spreading like a wildfire and now reaches nearly every school in the city in one way or another. Half of all schools will have traffic safety education programs this year, including programs to teach kids best practices to stay safe and encouragement projects like walking school buses and bike trains. These efforts help shift our transportation culture to be more multimodal and safety-conscious. They also help kids stay focused on their other lessons.

This quote from Dearborn Park Elementary Principal Angela Bogan in a city press release pretty much sums up how transformative these efforts can be in just the first year:

“The program has been an even greater success than I could have imagined. Kids long for the early morning activity; parents appreciate the opportunity to build a stronger community with their neighbors. Even teachers have noticed an improvement in classroom participation and energy on mornings when the walking school bus runs.”

But, of course, Safe Routes to School goes far beyond education. In a stroke of genius, the city began installing school zone speed cameras a few years ago as a way to immediately stem speeding near schools. City data shows that very few people who get caught speeding once ever get a second ticket, suggesting that the cameras are effective at changing people’s driving behavior.

They then use the money raised by the cameras to make permanent physical improvements to the streets, like building safer crosswalks, new biking and walking connections and speed humps. So the city is making streets near schools safer, then sending the bill to people who are caught speeding near those schools. It’s a rare example of government bureaucracy that is best described as “beautiful.” And knowing that your money is going to school traffic safety should take a bit of the sting out of getting an automated ticket.

And the revenue is not insignificant. The 2014 city budget anticipates more than $7 million, and the city anticipates as much as $9 million a year once the new cameras are operational. That is pennies compared to the cost of major highway and roads projects, but it will go far in making schools safer.

As the city expands the camera program to more schools, they are also able to expand the Safe Routes to School program. After a crossing guard was injured by a person driving who failed to stop while the guard was on duty in Ballard, we challenged the city to achieve the goal of zero dangerous streets near schools. They have apparently taken that goal seriously. A year and a half later, Safe Routes to School has reached nearly every school in one way or another, and permanent funding for the program continues to grow and fund further safety projects. One of those projects is focused on improving the crosswalk where the guard was injured.

We have a lot of work to do before every kid in Seattle can safely and easily walk or bike to school, but we could very well get there in a flash if the city keeps growing the program like they have been. It’s a huge undertaking that seemed impossible just a few years ago, but now feels within reach. The program sounds simple, but it is nothing less than a transportation revolution. And Seattle children are leading the way.

So how can you help? Well, you could help your school start a walking school bus or bike train (did you know Seattle Public School and the city have walking route maps for nearly every school?). Community groups, schools and PTAs can also apply for SRTS mini grants of up to $1,000 for a variety of walking, biking or traffic safety projects. All you have to do is complete the easiest application form you will ever find for a grant program (seriously, it’s four questions long). The fall application window opens October 1 and closes October 31, so now is a good time to find a group and develop your idea.

Through its Safe Routes to School program, the Seattle Department of Transportation (SDOT) is kicking off this school year with the launch of school traffic safety education campaigns that will reach nearly half of all schools throughout the city:
·         At Bailey Gatzert Elementary, SDOT is sponsoring a pedestrian and bicycle safety campaign focused on streetcar safety to coincide with the launch of the First Hill Streetcar.
·         At Mercer Middle School, Greenwood Elementary, Wedgwood Elementary, and South Shore K-8, SDOT and partners Feet First, Cascade Bicycle Club, Seattle Neighborhood Greenways and Harborview Injury Prevention Center will lead rigorous walk and bike to school education and encouragement campaigns throughout the entire school year.
·         Mini Grants of up to $1,000 will be available this fall for 20 school and community-based campaigns to encourage more walking and biking, and to make it safer for kids walking and biking to school.
·         Traffic safety yard signs will be posted in school zones at 40 schools throughout the city, reminding drivers to travel 20 m.p.h. in a school zone, stop for pedestrians and keep kids safe.

Dearborn Park Elementary Principal Angela Bogan, where a similar campaign was held last school year, stated, “The program has been an even greater success than I could have imagined. Kids long for the early morning activity; parents appreciate the opportunity to build a stronger community with their neighbors. Even teachers have noticed an improvement in classroom participation and energy on mornings when the walking school bus runs.”

“Through education and improvements SDOT is working to ensure that students across Seattle can travel to and from school safely,” said Acting SDOT Director Scott Kubly. “But we need your help to ensure that every child arrives safely at their destination.”

Below is a list of 2014 SRTS engineering projects (note that the document is from March, so progress is likely further than the “status” column suggests):