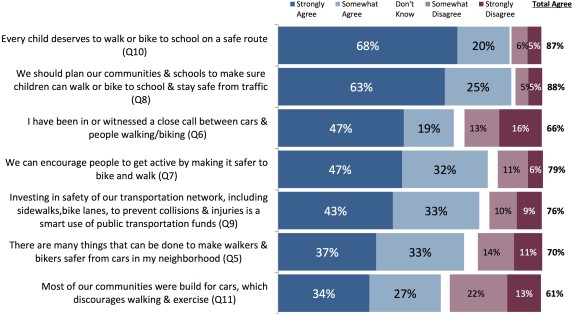 From the Childhood Obesity Prevention Coalition

If you think it’s a bad idea to make walking and biking routes around schools in Washington State safer, congratulations! You are a rare find.

A statewide phone poll commissioned by the Childhood Obesity Prevention Coalition found that a nearly unanimous 88 percent of state residents believes we should be planning our communities so that kids can safely walk or bike to school and stay safe from traffic.

And perhaps more importantly, state residents are willing to put their money behind their hopes for safer streets: 76 percent agree that “investing in safety of our transportation network, including sidewalks,bike lanes, to prevent collisions & injuries is a smart use of public transportation funds.” And when asked about whether Safe Routes to School funding is an important part of state transportation funding, 84 percent of residents said yes. When pollsters stressed that the state’s budget is limited, and some priorities need to be cut, 79 percent still said Safe Routes to School is important.

Washington Bikes sees the poll as a clear sign that residents want their lawmakers to include significant funding for the state’s very successful Safe Routes to School program in the next legislative session:

Washington Bikes continues to advocate for the heavily oversubscribed state Safe and Healthy Routes to School grant program that increases physical activity by getting kids walking and biking, improves safety and reduces vehicle citations, and improves concentration in academics and thus contributes to school performance. In each grant cycle far more school districts apply for the program than can receive funding.

While Washington Bikes successfully advocated for all-time highs in active transportation investments in the 2013-15 state budget, new federal and state funding uncertainties make the 2015 legislative session a critical test for the Governor and Legislature’s support of safer, healthier communities and better biking and walking.

“Success depends on working well with others and we know how important it is to have strong local and regional bike organizations working closely together and speaking in a unified voice when they go to the legislature. As we transform the region for bicycling, we are grateful to have a strong partnership with WA Bikes to ensure a coherent voice in Olympia is speaking up for cycling.” – Kiker

Cascade has scaled back its Olympia program significantly in recent years, a move that drew the ire of some longtime advocates who saw it as a sign that the club was disassembling its advocacy arm.

But at the same time, a refreshed WA Bikes (formerly known as the Bicycle Alliance of Washington) was building an even stronger statewide advocacy effort led by Policy Director Blake Trask. And, as we reported recently, Cascade’s new Advocacy Director Jeff Aken said his style is all about collaboration with other organizations and community partners.

Seattle and the Puget Sound region need strong bike advocacy in Olympia, and the average resident probably does not care which organization helps secure the Safe Routes to School funding they know we need so long as it happens. Hopefully, this growing partnership is the recipe that gets us there.