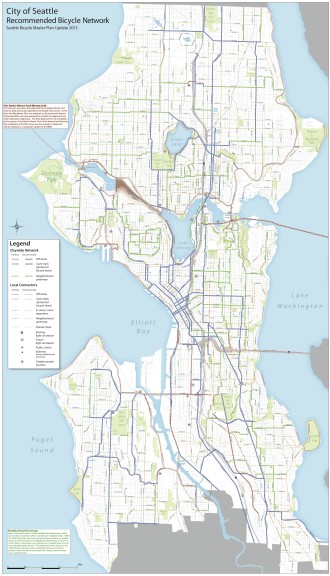 Which parts to complete first? There has been surprisingly little progress on that implementation plan since the Bike Master Plan passed in April.

Tuesday’s City Council Transportation Committee chat with incoming SDOT Director Scott Kubly got off to a strange start as committee chair Tom Rasmussen and Councilmember Mike O’Brien laid into Deputy Mayor Kate Joncas (and to a much lesser extent Kubly himself) for completely dropping the ball on developing an implementation plan for the Bike Master Plan.

Joncas apologized profusely, telling the council that implementing the Bike Plan is a priority for the Murray administration and that the work “just got dropped” and nobody caught it.

“It’s a top priority now to get it done,” said Joncas.

“Implementation is what I find most exciting,” said Kubly, who pointed to his record in Chicago where he helped install 60 miles of protected and buffered bike lanes in just two years.

The question now is whether the implementation plan will be done in time for fall budget talks, which is the city’s best chance this year to direct funding to the Bike Plan. The revised schedule for completing the document should get it done in time, but it’s getting close.

But Bill Lucia at Crosscut reports that, in a letter to council, Joncas also pointed to the department and mayor’s office ambitious acceleration of the 2nd Ave protected bike lane as one reason the implementation plan did not get done. Designing and implementing the downtown two-way bike lane in less than six months is a huge task, especially for a very understaffed department not used to completing such big projects on so short a timeframe. The 2nd Ave project is an all-hands-on-deck kind of effort for SDOT’s Bicycle Program, and it is important they get it right.

Perhaps this is yet another argument for making some budget space for one or several more staffers in SDOT’s Bicycle Program. We need SDOT to be able to bike and chew gum at the same time. The Bike Plan is ambitious, and this level of multitasking will need to become the new normal if we are going to get it done in time.

The Bike Plan Plan (officially dubbed the “Bicycle Master Plan Implementation Plan”) is essentially a guiding document that would use the prioritization framework in the Bike Plan to create a three-to-five-year deliverable list of high-priority projects. In other words, it’s the document we need to actually use the Bike Plan we just spent years developing. The Council mandated that the list be prepared within 90 days of approving the Bike Plan. For those keeping score at home, that would have been mid-July.

So the Councilmembers were understandably irked that SDOT and the mayor’s office have not even begun work on the document. Rasmussen said during the meeting that he was “shocked” they “haven’t even started it.” Even worse, they did not respond to the volunteer Bicycle Advisory Board’s (“SBAB”) repeated requests for updates on the document, and Rasmussen made it clear that he expects SDOT and the mayor’s office to take SBAB’s requests seriously.

Rasmussen also seemed concerned that the mayor’s office was taking their own path and ignoring Council instructions. Some of the irritation is likely about more than just the Bike Plan and reaches into the realm of Mayoral-Council relations.

“This was one of the core elements of the Bike Master Plan, and we had numerous conversations with staff, so it’s not credible that this was just dropped,” said Rasmussen.

It doesn’t help that projects continue to move forward around the city that completely ignore the Bike Plan’s suggested improvements:

During Tuesday’s meeting, O’Brien noted the importance of following through with plans like these. If the city does not, then people start to question why they even volunteered their time to help shape the plans, and they lose faith in the city’s process. The Bike Plan is barely 120 days old, and it’s already being ignored. That does not instill confidence that the city takes its responsibility to follow the plan very seriously.

On the other hand, it’s not like the Murray administration has been ignoring bikes. In fact, they are:

There are high expectations for the city’s Bicycle Program, and it may take investment from the Council and leadership from the Mayor’s Office and SDOT to meet those expectations. It may fall to Kubly to make the case for whatever resources SDOT needs to get the whole job done (no pressure, new guy!). But if all of SDOT’s wheels do get turning at the same time, Seattle is poised to make enormous strides on street safety and bike access.

Below is the Bicycle Advisory Board’s letter to Councilmember Rasmussen about the implementation plan:

You can watch Tuesday’s meeting below (the Kubly/Bike Plan stuff starts at 76:00):

14 Responses to SDOT fails to bike and chew gum at the same time, hasn’t started bike plan due last month