Lucia: Seattle one of the safest cities to walk, but that’s not good enough 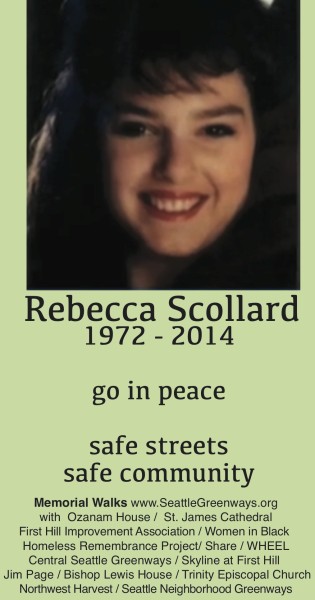 Seattle is one of the safest big cities in North America for people walking, but tell that to the 415 people hit by cars and trucks in 2013.

For every 100,000 Seattle residents, 1.15 people will be killed in traffic while walking. 60 people were very seriously injured in 2013, and many more still have been left with lesser injuries or psychological challenges due to the trauma.

But this level of pain and suffering actually makes Seattle safer than San Francisco (1.89), Vancouver, B.C. (1.42) and Portland (1.33), according to a must-read report by Bill Lucia at Crosscut. But, of course, it isn’t good enough.

Rebecca Scollard was killed July 31 in an afternoon collision with a CleanScapes garbage truck at Eighth and James. The exact circumstances of the collision are not yet clear, but this stretch of James is a well-known danger for people walking.

Friends and neighbors will gather at St. James Cathedral Wednesday to walk together to the site of the fatal collision. The memorial walk, organized by Seattle Neighborhood Greenways in conjunction with the Women in Black Homeless Remembrance Project, will be a chance to honor Scollard’s life and bring the city and community together to prevent this from happening to anyone else. From Central Seattle Greenways:

On July 31, Rebecca Scollard was struck and dragged under a truck at 9th & James. Seattle Neighborhood Greenways, working with other community groups, is coordinating a memorial walk to honor her and to work with SDOT to work to prevent such tragedies from occurring in the future. If you can, please join us.

We will gather in front of St. James Cathedral on 9th Avenue at 9:30 a.m., and then walk to the site of the tragic collision at 9th & James. There, people who knew Rebecca will say a few words to honor her, local singer/songwriter Jim Page will offer a song or two.

The event is planned in coordination with Seattle Women In Black, who will be holding their regularly scheduled vigil from 12 to 1 in front of the Justice Center at 5th & Cherry for homeless people who die in Seattle.

Organizers are also hoping to organize a post-walk gathering nearby to talk about how this can be prevented in the future.

And Seattle has the tools and experience to make our streets safer. Lucia cites the city’s changes a few years ago on NE 125th Street, which changed the four-lane street into one with a general traffic lane in each direction, bike lanes and a center turn lane. That project has even received national attention for being a low-cost and effective traffic safety project.

But traffic danger is the worst downtown and on the city’s highway-like neighborhood commercial streets like Lake City Way, Aurora and Rainier Ave, Lucia reports:

SDOT has found that since the change, speeding and accidents have declined on NE 125th Street. But the blocks north and south of NE 125 Street on Lake City Way continue to pose safety challenges. Vehicles hit 12 people between NE 110th Street and NE 145 Street on the busy north-south roadway in 2012. Two were seriously injured along that stretch of Lake City Way in 2013. “It’s an incredibly important pedestrian area that’s been treated as a highway,” [Janine] Blaeloch said. “It’s not just a commuter route.”

Lucia also speaks with Jourdan Keith, who was hit by a person driving who ran a red light on Rainier Ave in 2011. Keith is founder and director of the Urban Wilderness Project, but the collision left her unable to carry a 50-pound pack to lead backpacking trips. But beyond just her physical challenges as she regains strength, she has been left with financial burdens and a troubling lack of trust in others on the road:

Although Keith’s recovery is almost complete, she is not sure she will lead a backpacking trip again anytime soon. And she still avoids the area in Columbia City where the accident happened. “I don’t go to the post office, I don’t want to be around there, and that’s where I have to get my mail,” she said. “You get hit by a car, your trust in people is impacted.”

The era of looking at traffic violence as the acceptable cost of doing business must end. The real pain and hardship that dangerous streets levy on people stretches far beyond Seattle’s “good” 1.15/100,000 fatality rate.

If Seattle really wants to make our safe city ranking mean something, the city should redirect its transportation investments to focus on being the first big city in the US to achieve zero traffic deaths in a year. That’s going to take a lot more than just talk, it’s going to take a lot of money and political will (including will from the state) to address the city’s busiest and most deadly streets.

But imagine living in a city without traffic violence. I can’t think of a better investment.

10 Responses to Lucia: Seattle one of the safest cities to walk, but that’s not good enough