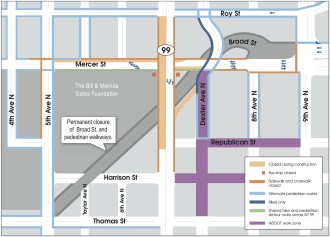 Routing through the construction area as of late July.

Ever since Broad Street closed for good and Mercer changed from one-way to two-way, people biking southbound on Dexter Ave have faced a new danger: Cars making right turns in front of them to access westbound Mercer.

But the city announced recently that they are taking action by banning motor vehicles from making right turns from SB Dexter onto WB Mercer, at least during the significant reroute at the intersection in place during construction. From SDOT:

The change is being implemented to eliminate conflicts between cyclists traveling through the intersection and right turning vehicles.

Readers began voicing concerns about these right turns almost immediately after two-way Mercer went into effect. The Seattle Times reports that the action comes after two right hook collisions at that intersection in one day last week.

Cascade Bicycle Club was quick to praise the city’s effort to maintain safety on Dexter during the significant road changes in the so-called “Mercer Mess” area:

“We are encouraged by the Seattle Department of Transportation’s pro-active steps to safeguard the lives of Seattleites. Dexter Avenue is well known as one of the more dangerous streets in the city with many high profile collisions in recent years, including the death of Michael Wang in 2011,” said Brock Howell, Cascade’s Policy & Government Affairs Manager.

“As Dexter Avenue and Mercer Street continue to undergo significant improvements, it only makes sense to continue to evaluate and modify street design to ensure all people — whether they are driving a car, riding a bike or walking — can move safely through the corridor.”

With so much construction in the area — including big detours to make room for utility relocation work as part of the SR 99 deep bore tunnel project — travel along one of the city’s busiest bike routes has a long way to go before it is truly comfortable.

Keep letting the city (and your fellow readers in the comments below) know about your concerns as the route detours shift and change. You can contact the Mercer project team at [email protected] or by calling the 24-hour construction hotline at (206) 419-5818.

In case you’ve forgotten what all the work is even for, here’s a rendering of the future connection on Mercer from Dexter to Lower Queen Anne: 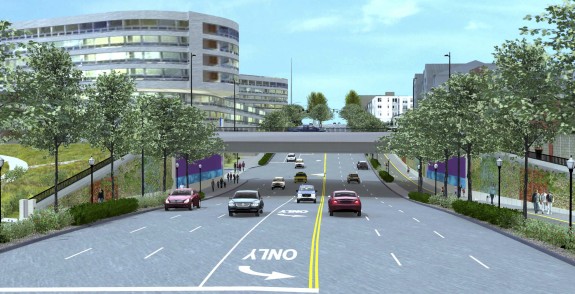