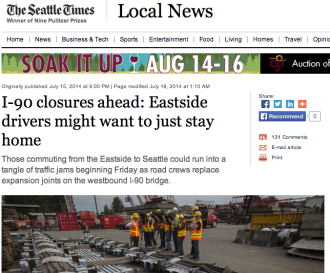 Screenshot from Seattle Times story than ran on the front page

It’s becoming a pattern. Every time a major freeway work project closes all or most the lanes, a media firestorm compares the upcoming commute to the end of the world.

All but one westbound lane on I-90 is closed as the state replaces aging expansion joints in the bridge between Bellevue and Mercer Island. Ahead of the work, The Seattle Times ran a front page story that suggested people just stay home (partly smart, but also somewhat defeatist). One particularly spastic radio personality got so worked up that he declared the road work a conspiracy by the state to force “every single person” in the region to get a Good To Go pass for paying the 520 bridge toll.

But when the day arrives — likely thanks in part to these apocalyptic media reports — it’s really more like a traffic jam that’s a little worse than usual. Today, many commutes took a little longer during the peak morning rush, but nothing terrible. For example, here’s a tweet from just after 8 a.m.:

Speaking of #I90to1, there’s a lot of green on our real-time traffic map. http://t.co/x1hhFxsWR7 pic.twitter.com/ejyZSj0luz

The reason is that people are adaptable. People avoid making unnecessary trips or delay their trips until off-peak hours. Some people who typically drive decide to take the bus or ride a bike instead. Some people carpool with coworkers and others take other routes that can handle increases in traffic. And, of course, a lot of people just pay the toll to take the other bridge.

As we reported previously, the best way around the work is to bike. Biking and walking access will be available throughout the work. When workers move to replace the expansion joints on the trail, people will be escorted through the construction zone.

It’s not yet clear how many people took up biking as a way to get around the work, but there are at least a couple:

.@BikingBis Sold a bike to a guy today. He said the upcoming carmegeddon was his tipping point for getting the bike.

The first day is the easiest, though. As was the case with other major freeway work, people take the need to change their routine seriously at first. But when they see that traffic really isn’t so bad, they go back to driving (thus causing worse traffic). Mike Lindblom explains the problem in the Seattle Times:

“We’re hopeful that people don’t get too comfortable, and expect this tomorrow,” [WSDOT spokesperson Mike Allende] said. In previous, major highway closures, the opening day turns out to be fairly light, followed by a second-day surge. In the “Viadoom” closure of the Alaskan Way Viaduct in 2011, the fourth day was the toughest commute.

So keep it up! Keep biking, and be open to helping a coworker or neighbor give it a shot for the first time. They might even like it and never go back to the daily stop-and-go grind that defines a car commute in the Seattle region. Because these not-actually-end-of-times road work projects teach us something important: We are not quite as dependent on driving as people think.

This entry was posted in news and tagged construction, i-90, I-90 trail, i90to1, wsdot. Bookmark the permalink.