Balk: Seattle car ownership is down, but it’s up in places you’d least expect 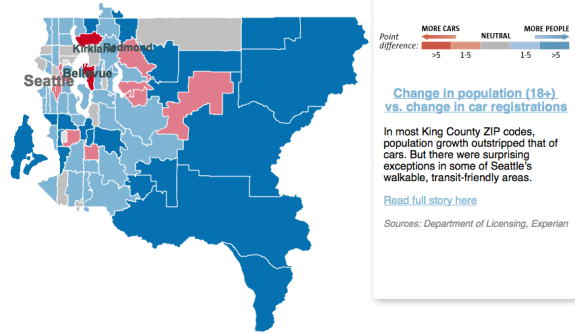 You almost cannot stand anywhere in the city center or Capitol Hill without seeing construction cranes. The number of residences in these walkable, bikeable and transit-rich areas is rising fast. It’s clear that people want to live where they have more transportation options.

But analysis by Gene Balk at The Seattle Times found something interesting: The population growth is outpacing car ownership growth in nearly all of King County, but not in the Seattle city center.

But it’s still a little troubling to see such growth in car ownership in the exact areas of the city where living car-free is easiest.

The growth in center city cars is due to gentrification. People who have the means for a car are much more likely to have one, even in an area where you don’t need one. Since so many of the new residences in the city center are pricey, a disproportionate number of new residents have cars. And the negatives of car ownership do not yet outweigh the benefits for a lot of people, even if they let their cars sit for long periods of time.

Balk spoke with one Capitol Hill resident who sums things up pretty well:

One factor, certainly, is the influx of young professionals who have the means to own a car.

For Holly Robins, 33, of Capitol Hill, the decision to buy a car was work-related. When the graphic designer took a contract job in Kirkland, she initially tried commuting by bus, but found the transit schedules didn’t jibe with her work hours.

So Robins bought a car — and she still owns it, even though she no longer commutes to the Eastside. A self-described “nature nerd,” Robins says, “not having a car sometimes made me feel like I was stuck in the city.” Although she admits that street parking on Capitol Hill can be a challenge, she still feels the benefits of car ownership outweigh the negatives.

As much as people complain about parking on Capitol Hill and downtown, there are still ample spaces for storing cars. Many residences have “free” parking spaces, and you can still find free street parking if you look hard enough.

That free parking is not actually free, of course. Every parking stall built in a new development’s garage adds cost (underground parking garages are insanely expensive) and reduces rentable space. You pay for that increase in your apartment’s rent or when you shop, eat or play in the building’s retail spaces. The same lack of affordable housing that drives the increase in gentrification also subsidizes car ownership for the new, more affluent residents.

Yes, this is backwards, and it doesn’t need to be this way. Obviously, car parking is not the only cause of gentrification, but it’s part of it. Balk’s map is a sign that the city needs to do a lot more to encourage (or mandate) developers to trade parking spaces for affordable housing. Because a lot more people are going to move to Seattle, and we should be ready to welcome them all regardless of income … but maybe not their cars.

19 Responses to Balk: Seattle car ownership is down, but it’s up in places you’d least expect