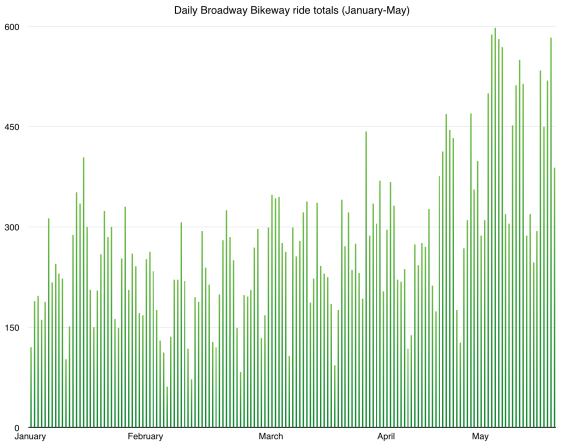 Biking on Broadway with the new two-way protected bike lane is night-and-day compared to the previous road design, which required people on bikes to mix with busy traffic on one of the city’s busiest commercial streets.

But use has been limited by a closure at the bikeway’s current northernmost point. People headed southbound on Broadway are detoured onto Harvard Ave, and people headed north must merge with cars at a bottleneck created due to Capitol Hill Station construction. This construction situation will continue in some form for most of 2014.

But even despite the fact that Broadway is essentially a dead end for people on bikes at the moment, use of the bikeway continues to climb according to data collected by a counter near E Union Street. Bryan Cohen at Capitol Hill Seattle reports:

Perhaps most interesting is the number of daily rides: In May, there was an average of 409 trips a day on the bikeway, including northbound and southbound rides. By the end of that month, weekday totals were easily approaching 600 rides. Weekday averages have climbed steadily since January, with a slight dip in February likely due to some hectic reroutes during construction of the Capitol Hill Station underground concourse:

Here are the Broadway bikeway weekday averages by month:

Keep in mind that the section directly south of the counter location was barricaded until early May, so the relevant data is just now starting to come in (few people will travel all the way to a bike route dead end).

Interestingly, even though the bikeway’s current peak day was May 14’s 598 trips (one day after the all-time Fremont Bridge record was set), the usage pattern does not appear to resemble usage over the Fremont Bridge. While the Fremont Bridge bike use is very commute-oriented, Broadway gets about as much use at 8 p.m. as it does at 8 a.m. during the morning rush.

CHS grouped weekends and weekdays into the same graph, so that might be part of the reason it’s hard to see clear commute patterns. It could also be that the bikeway was less useful headed toward downtown, since all the construction along E Union made it headache to use that street as a bike route. And, of course, the fact that the bikeway was barricaded at Union until May is likely another factor.

But it could also be that Capitol Hill is a big nightlife destination, and we may simply get different ridership patterns there than on a route like the Fremont Bridge. Broadway is the neighborhood’s center, and people traveling to QFC to get groceries or to a bar or a protest or any of the other gazillion things to do in Capitol Hill will result in a different usage pattern. If there is a neighborhood in Seattle that never sleeps, it’s Capitol Hill.

Though the bikeway is partially open now, we won’t get to see it in full force for several years. When/if the streetcar and bikeway are extended at least at far as Roy and Capitol Hill Station opens in 2016, then we’ll have a real picture of what it can do for bike transportation on the Hill. Stay tuned for more on the bikeway extension open house held earlier this week.

8 Responses to CHS: Broadway Bikeway ridership on the rise despite north end closure