Here’s a look at some work on major trails in the region next week you should be aware of.

First up, King County will repave sections of the Sammamish River Trail near 60 Acres Park in Redmond. Details from King County Parks:

A King County Parks crew will repair and repave portions of a one-mile stretch of the Sammamish River Trail near Redmond next week, leading to minor delays for trail users.

The work is scheduled to take place from Monday, June 16 through Thursday, June 19 along a one-mile-long stretch of the trail near 60 Acres Park.

There will be no closures or detours associated with this work, as trail users will be escorted around the work. All cyclists will be asked to dismount and walk bicycles through the work zone.

UPDATE: I just received a notice of a second SRT detour later this month, June 23-27: “City of Redmond is constructing a new water quality facility and requires a temporary detour of the Sammamish River Trail between NE Redmond Way and Leary Way NE. Trail users will be routed onto the Redmond Central Connector Trail to safely bypass the construction zone. See the City of Redmond project page for more information.” 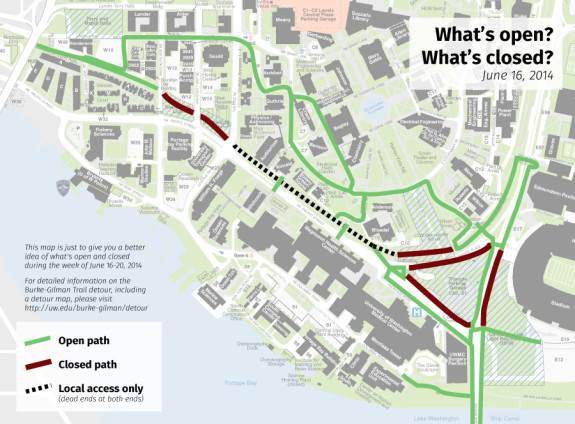 The headaches just north of the Montlake Bridge continue with more detour changes. By this time, the thousands of people who bike through the area daily are no doubt used to getting lost and traversing extremely skinny pathways and sidewalks. Well, next week will be no different as yet another key sidewalk is closed.

The best route options through the area may be some rather unofficial routes, which is definitely not among best practices for a major bike route disruption like this one. Heading northbound, the Husky Stadium parking lots are one option, as is the somewhat signed East Campus bike route, which requires some off-road biking (but is a lot of fun if you can follow it).

The eastern sidewalk on Montlake Boulevard NE, between the Montlake Bridge and NE Pacific Street, will re-open in early June.  This section of sidewalk was closed for restoration.

Sidewalk restoration work will then move to the north.  Starting in mid-June, the eastern sidewalk on Montlake Blvd NE, between NE Pacific Street and NE Pacific Place, will be closed. The sidewalk will remain closed until early September. 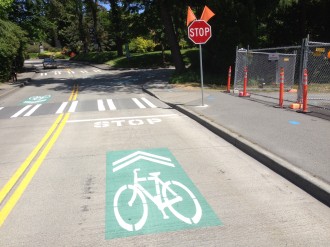 Meanwhile, the Burke-Gilman Trail detour through UW campus has been marked using sharrows inside green boxes. These certainly help people avoid getting lost, but there are many tight turns and crowded shared spaces. So go slow, be patient and keep remembering that the trail will be totally awesome when they finish the work.

As a reminder, here is the current Burke-Gilman detour map: 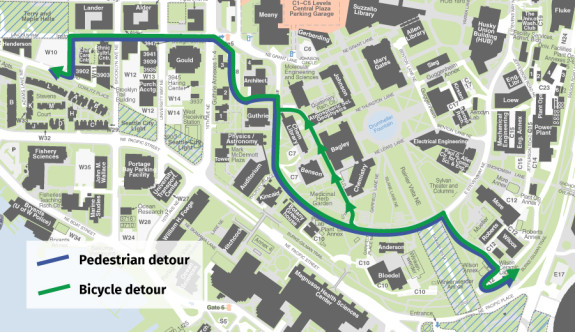