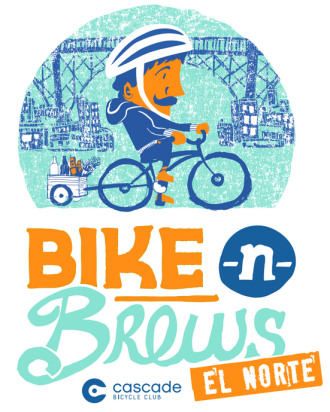 In its second year, Bike-n-Brews is a young Cascade Bicycle Club event, especially compared to the club’s iconic Seattle to Portland Classic first held in 1979.

Bike-n-Brews is a much different kind of ride. It’s less about distance and more about, well, enjoying a ride and grabbing a beer. And for the first time, they are hosting a northbound version of the ride sticking mostly to the Burke-Gilman Trail.

Bike-n-Brews El Norte starts and ends in Myrtle Edwards Park along the waterfront just north of downtown. The ride will then head to 192 Brewing in Kenmore for a beer stop before heading back to Seattle for music and food (there are soft drinks for people who don’t want to drink). If you have never biked 48 miles before, this could be a good, low-stress and almost entirely flat way to give it a shot.

On one level, Bike-n-Brews is just about having fun on bikes. But it’s also an effort on Cascade’s part to appeal to a wider range of people (Disclosure: Cascade advertises on Seattle Bike Blog). The ride is fairly easy, but just long enough to make you feel like you earned your beer.

Online registration has ended, but you can register at the start for $50 (includes a t-shirt and drink tickets). More details from Cascade:

Due to the overwhelming popularity of our original Seattle Bike-n-Brews south-end ride, we have added a brand new event to this year’s ride roster: Bike-n-Brews El Norte (the North)!

Last year’s inaugural event drew a truly eclectic mix of riders—young and old, Lycra and jeans, fixies and carbon road bikes. And, with route options of 12, 38 or 48 miles, this is a ride anyone can complete.

The route begins and ends at scenic Myrtle Edwards Park near Downtown Seattle. Bike-n-Brewers are taken on an out and back ride to Kenmore, utilizing the Elliot Bay, Ship Canal and Burke-Gilman bike trails, and lightly traveled roads in between.

The start/finish line will feature live music and food. With their paid registration, riders receive an event t-shirt (must register before May 28 to receive t-shirt) and beverage tickets good for beer at both breweries. The mid-point rest stop will be at 192 Brewing Company in Kenmore. Riders can use a beer ticket here and fuel up on soft drinks and ride snacks. Hot food will be available for purchase. The Myrtle Edwards Finish Line Festival location overlooks beautiful Elliott Bay, featuring live music and beer from both Fremont Brewing and Peddler Brewing companies!