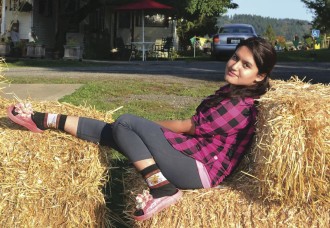 Sandhya Khadka. Image from the vigil flier (see below)

Sandhya Khadka was walking to the bus she takes to class at North Seattle Community College Monday morning when a person driving a pickup truck struck and killed her. She was 17.

Khadka, a native of Nepal, was in Seattle to study. She wanted to be an accountant, the Seattle PI reports. Her father lives in Seattle, but her mother lives in Nepal. She was their only child.

The Pinehurst Community Council, Seattle Neighborhood Greenways, family and friends are holding a candlelight vigil for her at 7:30 p.m. tonight (Thursday) at the location where she died, NE 115th Street and 5th Ave NE.

Family and friends “hope to honor Sandhya and to create awareness so that no other young person should die like this,” according to the PI:

Her father, Sahadev Khadka, lives in Seattle and her mother lives in Nepal. She was staying with a friend of her parents, Shraddha Kakshapati, who lives here. Kakshapati said that she is organizing a fundraiser to help the father after the death of his only child.

The family will provide some candles, but encourage those who join to bring candles with them. They hope to honor Sandhya and to create awareness so that no other young person should die like this.

Khadka was crossing 5th Ave NE at NE 115th Street to catch the 41 bus when the person driving the pickup struck her. The intersection is an unmarked crosswalk. Like most intersections without a traffic signal, people walking have the right of way to cross from corner-to-corner even if there is no zebra-stripe or other crosswalk marking.

It is unclear what circumstances led to this collision or if a marked crosswalk could have helped. But the PI reports that the the community has voiced concern in the past that a more significant crossing improvement is needed at this intersection due to all the people trying to access the bus stop.

SDOT rejected a 2013 request for a crosswalk because the intersection did not meet criteria for a crosswalk, according to the PI. This stretch of NE 115th Street is designated as a potential neighborhood greenway in the recently-approved Bike Master Plan. Neighborhood greenways provide traffic calming on residential streets like NE 115th Street and improved crossings at busier streets like 5th Ave NE.

More details on the vigil from organizers: 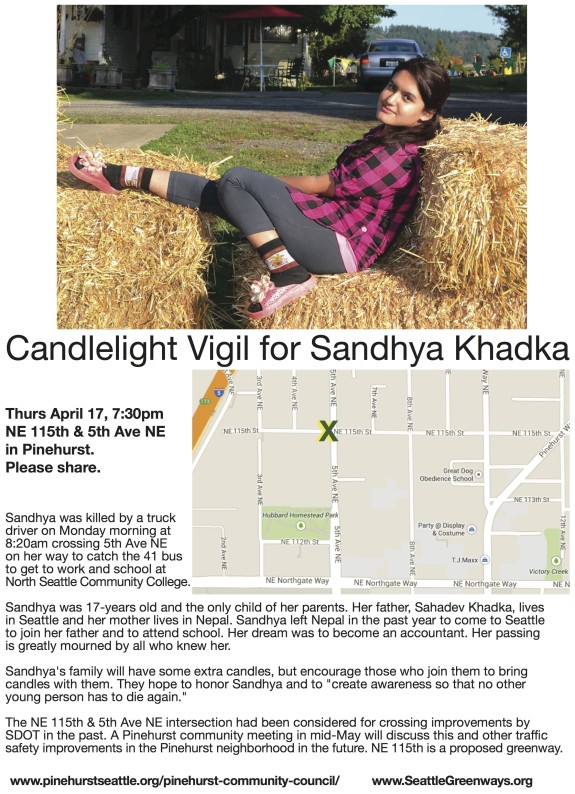