Work on Hwy 99 tunnel ramps will close Dexter bike lanes + Is this a chance to extend the redesign? 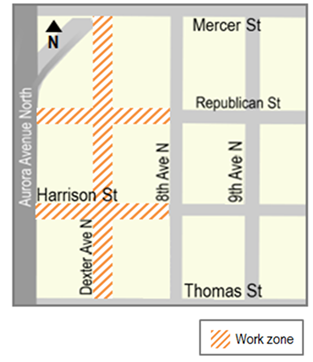 Map of construction zone (does not show exact closure info, just where to expect delays or bike lane closures)

The state is set to start utility relocation work to prepare the area between South Lake Union and Lower Queen Anne for the Highway 99 tunnel’s new on and off ramps. That means crews need to dig up parts of Dexter Ave between Mercer and Thomas Streets starting next week.

“A bicycle lane will be maintained in both directions on Dexter Avenue North during peak commute hours,” according to an email from WSDOT’s Alaskan Way Viaduct Project spokesperson Laura Newborn. “Bicyclists may have to merge with traffic during off-peak hours.”

But this work is just a taste of what’s to come. While these are short closures to do preliminary work, “there will be some longer-term lane-narrowing on Dexter Ave N. north of Mercer St. later this spring, lasting into summer,” Newborn said in an email.

Dexter is an absolutely vital part of the city’s bike network. It sounds like WSDOT will try to keep bike lanes open in each direction when they can, and I hope they take that goal seriously.

I also hope there are plans in the works to take advantage of the WSDOT work as an opportunity to redesign the south segment of Dexter. As we reported in 2011, the city widened the bike lane buffer space following the tragic death of Mike Wang at Thomas St. But that was not enough to prevent more collisions, and there was a clear call for more significant changes, like protected bike lanes and a center turn lane.

The city said in August that it will evaluate the street for more changes in 2014, but there was no indication of when work on any changes might begin. 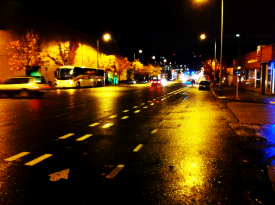 Auto traffic on this stretch of Dexter is relatively low, and bike volumes are high. The highway-style design it currently has (with four general traffic lanes) is out of proportion with the actual use the street gets. It makes it very uncomfortable to cross the street on foot and to make left turns on and off the street if you’re driving or biking. The wide lanes and stressful design leads to people making mistakes that have killed and injured others.

These problems are set to become even more significant when the street grid is partially reconnected between South Lake Union and Lower Queen Anne. Dexter needs a full redesign that puts people and safety first.

I have a question out to SDOT about plans for this stretch of Dexter and will update you all if I learn more.

Details about the upcoming work:

Construction has begun on new ramps that will connect the existing lanes of SR 99 to the north entrance of the SR 99 tunnel. To make room for construction, crews will be relocating utilities on Dexter Avenue North and on Harrison and Republican streets. Preliminary work includes drilling holes to confirm the location of existing utilities.

5 Responses to Work on Hwy 99 tunnel ramps will close Dexter bike lanes + Is this a chance to extend the redesign?