To complement big changes coming from the University of Washington and Sound Transit, the city is close to completing design for the U District’s first ever neighborhood greenway.

Located on 12th Ave NE, the neighborhood greenway will connect from the Burke-Gilman Trail to Ravenna Boulevard and includes a desperately-needed traffic signal at NE 50th St that should also help reduce collisions there.

At a November open house, SDOT staff said that half of all collisions on this stretch of 12th Ave NE occur at NE 50th St. Workers at nearby businesses told the open house attendees they had witnessed more than a dozen of crashes at the intersection of the years, and several people on foot have been struck by cars.

At the south end of the project, the neighborhood greenway will take advantage of construction that will finally open up bike/walk access from 12th Ave to the Burke-Gilman Trail.

The UW demolished the former Terry Hall/1101 Cafe building that blocked access throughout recent memory. UW’s new Maple and Terry Halls are nearing completion, and the new design will create a pathway south of Campus Parkway. The project should be complete this summer. 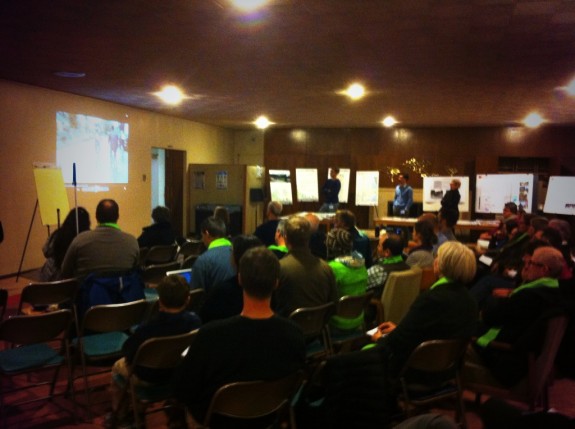 SDOT held an open house to discuss the project in November

At the north end of the neighborhood greenway, the connection to westbound Ravenna Boulevard will still require a bit of a detour or some off-roading since the park-like center median does not yet have a pathway across it at 12th Ave NE. SDOT notes that this connection could be a good candidate for a future investment. In the meantime, there is a connection to the Brooklyn crossing via NE 58th St that, while a little wonky, could provide an interim connection for westbound riders (Note: This connection is missing from the incomplete map at the top of this post, so don’t get confused): 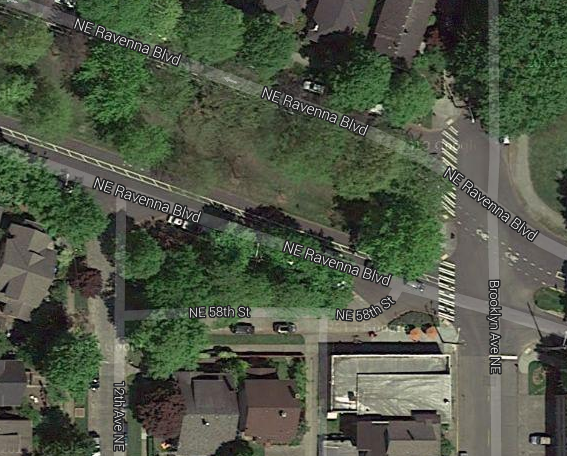 The 12th Ave route is due in large part to the hard work of University Greenways, which has been promoting the concept for years. That group is always looking for new members, so if you like the 12th Ave idea or want to expand and improve the number of safe streets in the neighborhood, get in touch.

More details on the project, from SDOT:

Last November, SDOT started exploring the idea of a neighborhood greenway in the U District. We hosted a meeting in November and quickly learned that there is a lot of great stuff happening there! The University of Washington is building Maple and Terry Halls. This means new open space and a pedestrian link to the Burke-Gilman Trail, as well as crosswalks on the east and west sides of 12th Avenue NE and ADA-accessible curb ramps on Campus Parkway. Sound Transit’s started constructing the University Station for the Northgate Link Light Rail project. And ‘Only in Seattle’ is funding a community-led partnership to work on public safety, business development, urban design, marketing and neighborhood leadership. So cool! But now back to SDOT.

A neighborhood greenway is a great way to link the people in the community to the new assets being built. Based on public feedback, agency coordination and our evaluation we are recommending a greenway on 12th Avenue NE. The map below shows the traffic improvements that would be implemented.

This entry was posted in news and tagged 12th ave ne, sdot, u district, university greenways, uw. Bookmark the permalink.