A look at the amazing planned Yesler Terrace hill climb

Image from a presentation to the City Council Transportation Committee

One of the most interesting upcoming projects for people on foot and bike in Seattle has not received much attention yet, but it could revolutionize the way people get to and from Yesler Terrace and First Hill.

The 10th Ave S Hill Climb is largely grant-funded and part of a street vacation deal with the city as part of the large-scale redevelopment of Yesler Terrace that is now underway. Construction on the hill climb is scheduled to begin this year.

When completed, the stairway and gradual ADA ramp will connect Yesler Terrace to Jackson Street, Little Saigon and the International District. It will also likely be a stunning place to hang out and enjoy the stunning view from the south side of a very steep part of First Hill.

Today, 10th Ave S does not go through, and very steep grades leave very few options for moving between Yesler Terrace and Jackson Street, especially if you are on a bike or have mobility issues. Here’s how the hill climb area looks today: 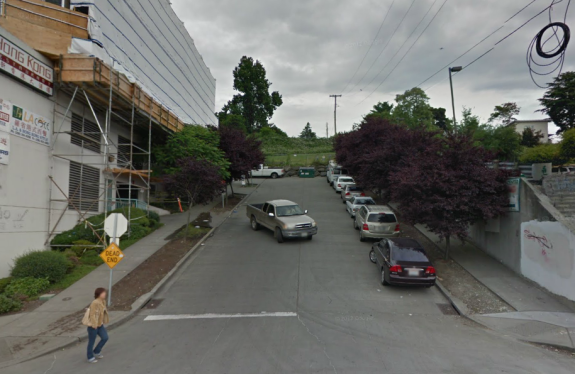 The hill climb will not likely be a high-volume bike route, and it’s not really designed to be. In fact, it’s not even listed on the Bike Master Plan draft (though it probably could be noted as a desired “neighborhood connector” route). But it could be a game-changing connection for people who live, work or play in Yesler Terrace and parts of First Hill.

It will also help connect to the Broadway Bikeway, which is not marked on the map below but follows the streetcar tracks north from the heart of Yesler Terrace: 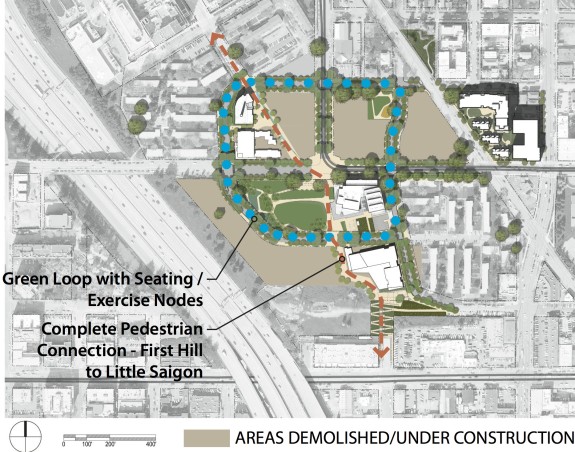 The hill climb is also the first attempt I have seen by the city to install a runnel in the middle of a stairway, where there is no handrail to get in the way of people pushing their bikes up the hill: 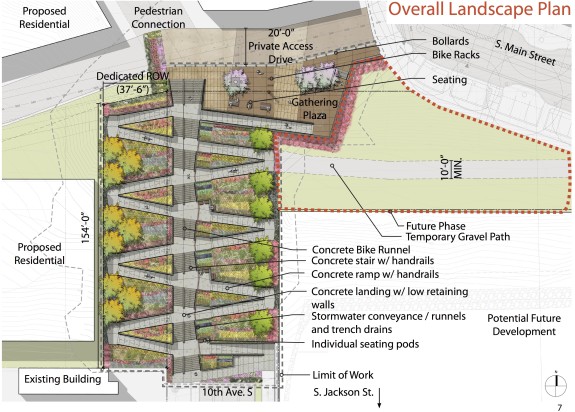 For more on the project, check out their recent presentation to the City Council Transportation Committee (starts around 33:00 mark):