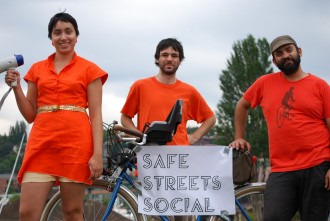 From left: Adonia Lugo, me and Davey Oil in 2011. Photo by Anne-Marije Rook

A bill making its way through the US Congress would require every state to develop a complete streets policy for projects that receive Federal funding. That means road projects would need to consider all road users, including people on foot and bike.

Seattle already has such an ordinance, but not Washington State. Passing the Safe Streets Act of 2014 would be huge for a nation with far too many dangerous streets. For more on the bill, see this StreetsBlog USA story.

But Adonia Lugo at the League of American Bicyclists (who lived in Seattle for a couple years before moving to DC) sees even more opportunity for the national bike movement. Writing about the New Opportunities for Bicycle and Pedestrian Infrastructure Financing Act of 2014, another good bill making its way through Congress, Lugo says this is a chance for the growing bicycle movement to become more tightly-integrated with other social justice efforts around the country:

I have heard bike experts make a lot of claims about what bike infrastructure can do: produce new users, boost local economies, improve family health, and change people’s minds about whether biking is safe. But I’ve also heard them claim that it can’t do other things, like contribute to displacement or address our enduring inequality problem.

In other rooms, I’ve heard environmental justice advocates cite studies showing that people of color use transit and non-motorized transport modes more than white people do, and then leave biking and walking out of their analyses. I get email blasts from equity-focused organizations whose mastheads show images of walking, industry, and transit, but no bicycles.

It’s time for the bike movement to find common ground with transit and environmental justice advocates. If we want to realize the economic potential for bicycling to save transportation dollars and access jobs, we need to be part of the transportation equity picture. This goal is reflected in the League’s new mission and vision, which calls for “a nation where everyone recognizes and enjoys the many benefits and opportunities of bicycling” and acknowledges that to achieve this, we must “engage diverse communities and build a powerful, unified voice for change.”

Importantly, this can happen whether these bills pass Congress or not. As the modern bicycle movement grows beyond recreational riding and into a more utilitarian transportation mode for everyone, the benefits of bicycling can and should become widely available to people of all races, ages and income levels.

But it won’t happen on accident. Like every cultural shift, it will take hard work both to pass needed legislation and invest in safe streets, but also to build a wide coalition that gives everyone a voice and the opportunity for more transportation choices in every neighborhood.

This entry was posted in news and tagged adonia lugo, federal government, league of american bicyclists, safe streets act of 2014. Bookmark the permalink.