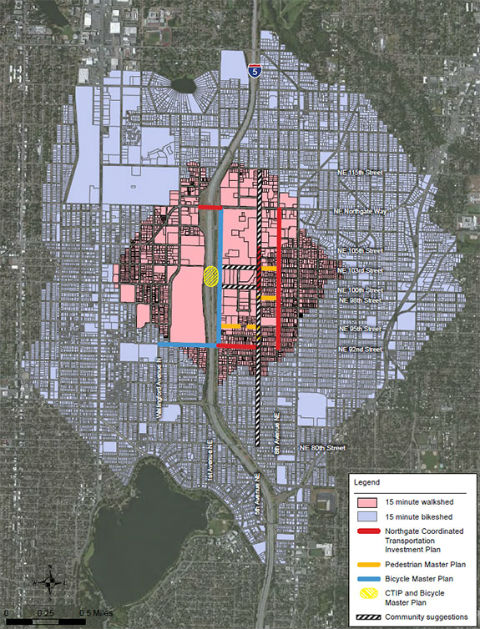 A bridge over I-5 connecting Northgate Mall and the planned Northgate light rail station to North Seattle Community College would offer immense benefits to the neighborhood and ridership for the transit line. But it’s not going to be easy.

First, the problem: There is no way to cross I-5 between 92nd St and Northgate Way (effectively 110th St). And since Northgate Way is not at all bike-friendly, the closest I-5 crossing that is not terrifying on a bike is 117th St. That’s a remarkable 25-block barrier without a safe way for people to bike, all in the midst of a rapidly-growing neighborhood. Even without a light rail station, the bridge is needed.

For someone on foot, walking to the new station would require traveling 16–20 extra blocks if there were no bridge. That is enough to discourage a huge number of trips and would essentially leave the station stranded on the edge of a giant parking lot.

But building the bridge will not be easy or cheap. SDOT’s Art Brochet, who is in charge of outreach for the project, presented at Wednesday’s Seattle Bike Advisory Board meeting and explained the biggest cause of bridge challenges: The freeway is elevated above the street level, and highway standards require the bridge to be pretty high above the freeway surface (for oversized vehicles, etc).

Basically, that means the bridge would have to be more than 60 feet above 1st Ave NE. At a five-percent ADA-compliant grade, that’s a couple city blocks worth of ramp just to get to the street. For an idea of how high up the freeway is, here’s a view from 1st Ave via Google Street View: 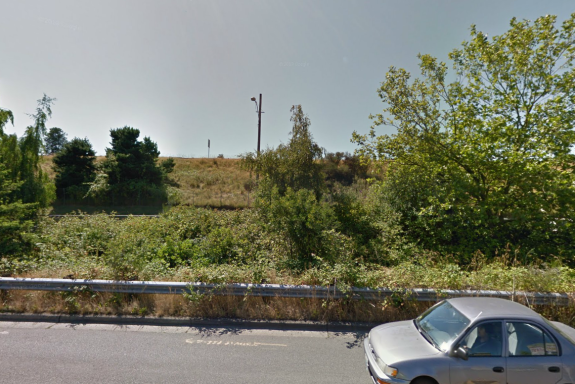 Who in the world thought this was a smart way to design a freeway?

Brochet mentioned that a cargo-sized elevator might be considered instead of a ramp, and he went to the SBAB meeting in part to gauge reaction to that idea. He also pushed back against the idea that the bridge could cost $16-18 million, as a draft study estimated. He put the price more in the $25 million range.

I-5 damages and divides many Seattle neighborhoods, but the design in Northgate is particularly awful. Unfortunately, this means even fixing the problem a little bit will cost a lot. That’s not a reason not to do it, though. Walkability and bikeability in the area won’t get any better unless we do something about it.

So it seems to the the decision about what kind of bridge to build relies largely on cost comparisons. If a cargo elevator design proves to put the project within budget range, then maybe that could be a good option.

But maybe this is also an opportunity to build a mini-wonder, an icon of Northgate that reconnects the sometimes isolated neighborhood both literally and symbolically. Imagine spiraling or swooping ramps connecting the new station to the towering bridge. It could be pretty impressive.

Either way, the $5 million Sound Transit has pledged to the project (matched by Seattle) is dependent on the project finding the rest of its funding before the end of 2015. If funding is not secured by then, the plan is to spend that $5 million on other biking and walking projects in the area instead.