A lot of you biked to a Super Bowl party, and there’s data to prove it 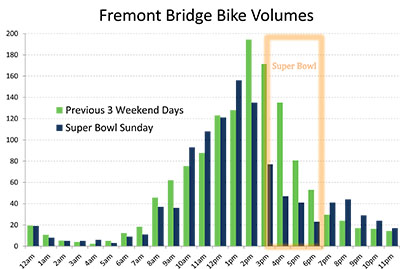 A lot of you biked to a Super Bowl party Sunday, and the Fremont Bridge bike counter captured the data to prove it. It also looks like a bunch of you hung around for a little post-game partying and high-fiving, too.

SDOT posted the graph above on their blog, which shows above-average bike trip rates in the hours before and after the game, but a big lull during it. I suppose there are no surprises here, but if there was any doubt that the 12th Man rides a bike, the answer is yes.

And the city is going to need a whole lot of you to do it again Wednesday. King County anticipates some seriously packed buses as fans swarm downtown for the victory parade. And obviously, driving to the parade will be hell. 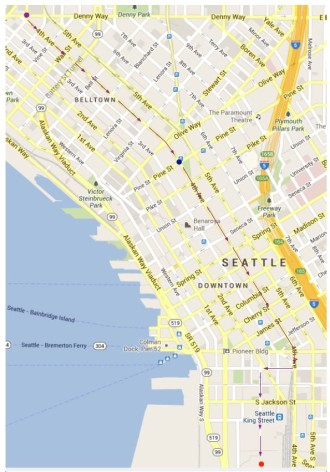 If you squint, you can see the parade route on 4th Ave (map from the city)

Be aware: 4th Ave will be closed starting at 10:30 a.m. for the parade, which starts at Seattle Center and ends at Century Link Field. So if you’re traveling through the area, I’d make sure to do it before 10:30 or be prepared for a long detour.

Or you can just join the crowd.

If you can’t find a place to lock your bike, here’s a pro tip: A lot of office buildings have bike racks in their underground parking garages. And since they are hidden from view, they usually have space open.

On the topic of data captured by the Fremont Bike Counter, bike trips over the Fremont Bridge were way up last month compared to the same month in 2013. In fact, there 15,000 more trips in January 2014 than in 2013, representing a 33 percent increase in just one year.

This continues a trend we noted in November. At first I thoughts a lot of the increase was just due to weather, and maybe that’s still part of it. But as the trend continues to repeat itself month after month, it’s starting to look pretty solid.

16 Responses to A lot of you biked to a Super Bowl party, and there’s data to prove it