Woman spots her stolen bike on front of a Metro bus, gets it back 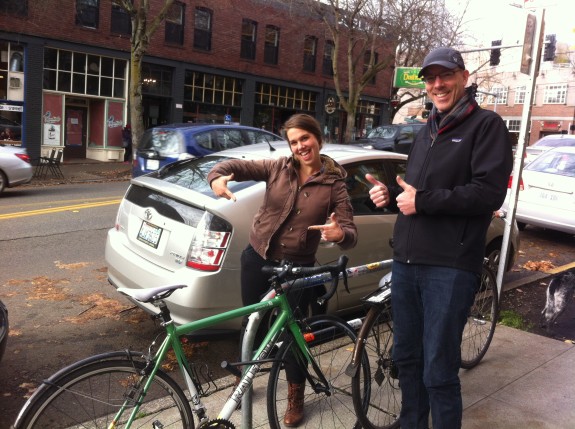 Beth Gunn (left) with Matt Leber, the bus driver who helped her get her wheels back 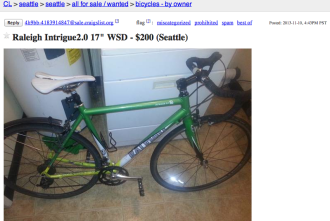 Screenshot of Craigslist ad for her stolen bike

Beth Gunn returned home from vacation to discover something devastating: Her bike was no longer in the bike parking area of her Queen Anne apartment building where she left it locked up.

“That’s my car, that’s how I get around,” she said over coffee recently. “I don’t have money for a new one.”

Frustrated and now on the verge of being late to work at one of her jobs, she ran to work. When she had the chance, she reported the theft to Seattle Police and emailed Seattle Bike Blog to ask what else she can do to get it back. That’s when she found her ride listed on — yep, you guessed it — Craigslist.

But Beth would not need to set up a fake buy or plead with police to help her catch the person who took her wheels. Instead, a little serendipity and a lot of thief stupidity created a magical moment: Waking down the street near her apartment, she saw her bike headed toward her strapped to the front of a RapidRide D bus.

So she did what she had to do: She stood in front of the bus and told the driver she wasn’t going to move until she had her bike. Luckily, the man behind the wheel is a bike commuter himself who writes a blog about biking and transit. You might know Matt Leber better as VeloBusDriver.

As soon as she started talking to Matt about the bike, a couple people exited the bus through the rear doors. Indeed, when Matt asked the passengers if anyone owned the bike on the front, nobody answered. They waited for a King County Metro supervisor, who gave Beth the OK to take the bike.

Beth, Matt and I got together for coffee recently to talk about what happened and celebrate her reunion with her wheels. She said she felt bad about making everyone on the bus wait, but Matt and I assured her she did the right thing.

Plus how cool is that? I’ve heard of a couple bikes being stolen off the front of buses in other cities (though I can’t recall hearing of it in Seattle), but I’ve never heard of someone recovering their bike that way.

Unfortunately, Beth said at least three other bikes are missing from her apartment building’s bike parking. Though her building manager is considering installing more secure bike parking, for now she is hauling her bike up to her apartment for safe keeping.

43 Responses to Woman spots her stolen bike on front of a Metro bus, gets it back