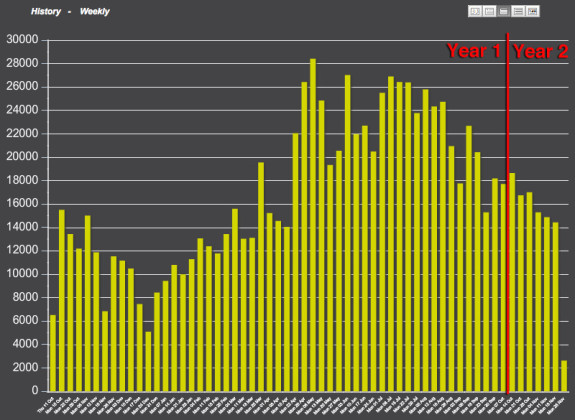 The Fremont Bridge bike counter tallied its one millionth bike trip early Sunday morning, a little more than 13 months after it was activated.

But perhaps even more exciting, SDOT reports that bike traffic over the bridge is up 28 percent versus October and November 2012. Indeed, every weekly count since passing the one-year mark has seen higher bike use than the same week last year. It will be interesting to see if this pattern is maintained over time, but it’s a very promising start.

In some ways, this is when the bike count data starts to become really rich with information. We have never had this depth of bike trip information before, and the opportunities to crunch the data are immense (if that’s your thing, you can access the raw hourly count data via data.Seattle.gov).

Previous bike count methodologies varied wildly year-to-year, and Census data only captures work commute trips and has too wide a statistical margin of error to provide dependable year-over-year comparisons. A common problem with Census and hand counts was that bike use seemed to fall a little some years, and grow a lot other years. In reality, bike use was probably growing gradually, and the ups and downs were mostly just statistical noise. The Fremont counter will give better clues about what bike use trends actually look like.