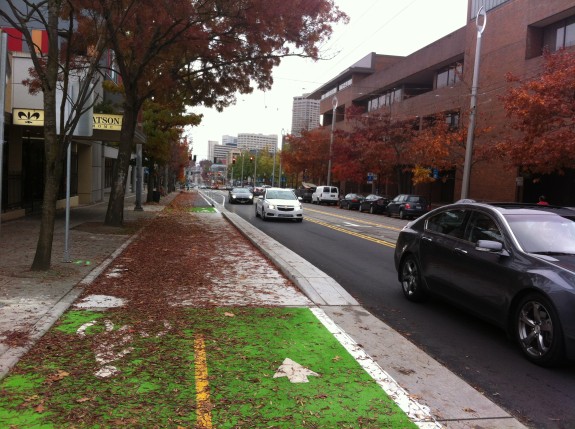 Bike Portland reported this week that their city has purchased a special street sweeper vehicle that fits into the city’s new protected bike lanes.

Protected bike lanes are appealing and safe for people on bikes because a barrier of some kind separates the lane from motor vehicles. This extra protection is vital to creating space that people of all ages and abilities feel safe using, but it also creates a problem: Street sweepers are often too big to clean them.

This problem became immediately clear when a short section of the Broadway Bikeway opened in mid-October, the same time the street trees decided to lose all their leaves. The result was, well, you can see in the photo above.

But Seattle is not going to be out-sweepered by Portland, and has plans to purchase a bike-lane-compatible sweeper of their own in early 2014. In the meantime, crews will handle clearing the city’s few protected bikeways. From SDOT spokesperson Rick Sheridan:

As protected bike lanes are a new type of facility for the city, SDOT is establishing a maintenance program specifically for them. We don’t have a sweeper suited for their narrow space and surface type, so we are currently evaluating several regenerative air sweepers to address this need.

Our goal is to complete the equipment purchase by the end of the first quarter of 2014. Until then, we will use our maintenance laborers to keep the cycle tracks clear.