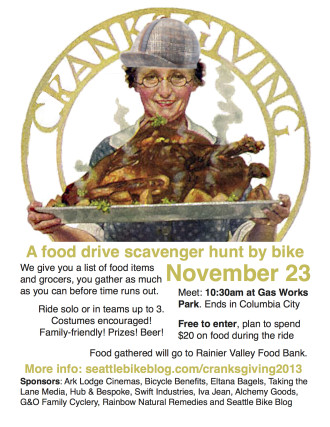 A food drive scavenger hunt by bike, Cranksgiving is a fun way to tour some of Seattle’s most unique grocery stores and food stands, gathering food for Rainier Valley Food Bank.

We give you a list of food and grocers, and you gather as much as you can before time runs out. You get points for each item and each grocer, plus points for other bonus challenges. All the food will be donated immediately at the finish line.

Meet at 10:30 a.m. in Gas Works Park. The ride ends in Columbia City with an after-party at Ark Lodge Cinemas.

The event is free to enter, but expect to spend about $20 during the ride.

Last year, riders gathered and donated more than 500 pounds of food from grocers all over the city. You can see photos from the ride here. We hope this year will be the biggest Cranksgiving ever.

And it better be, because this is the first year we have a Cascadia challenger: Portland (booo!). Yes, Seattle’s southernmost suburb has decided to host it’s first* Cranksgiving this year (*they actually held one in 2008, but this is the first in what PuddleCycle hopes to be an annual event). They even called us out, claiming they think they can get more riders than we can. There is a yet-to-be-acquired gaudy trophy at stake here, and I want it.

So join us! And share the event with all your friends via Facebook. You can ride solo or in teams up to 3. Bring a pen, a way to carry food and a camera for the photo challenges.

Costumes are encouraged (there may even be a prize for the best one). There will also be a raffle, so you don’t have to race to win awesome stuff!

For more information or to leave a comment, see the event page.

Founder and Editor of Seattle Bike Blog.
View all posts by Tom Fucoloro →
This entry was posted in news and tagged cranksgiving, cranksgiving 2013, events. Bookmark the permalink.