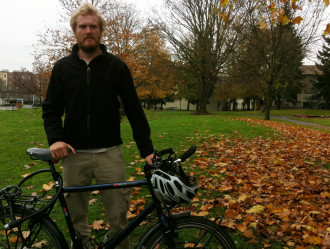 Dirk Spits worked for years in a Hosteling International in Amsterdam when he got an itch to do something bold for the world. So he started a charity called 99% Ride.

The “gimmick,” as he put it, is that the world would be a better place if everyone gave just 1 percent of their money, time and knowledge to charity. 99% Ride has teamed up with another nonprofit: The 1% Club (no, this is not an Occupy Wall Street reference). The 99% Ride funds will go to 10 – 15 organizations in Central and South America, some of which  Spits plans to visit on his ride to Argentina.

Oh, did I mention that he started his ride in Alaska? And due to a later start, he barely beat the winter as he biked across Alaska and the vastness of British Columbia, though he did have some days below freezing and even some hail.

“You have to ride by the rules of nature,” he said. Whistler passes closed due to snow shortly after he rolled into Vancouver, the first major city on his trip.

This is the first cycle tour Spits has done, though he was into road cycling back in Europe.

The initial start-up costs for travel, vaccinations and such were gathered via a crowdfunding campaign back in the Netherlands. Now they are on the money-raising part.

Spits is in Seattle this week trying to scrounge up folks to either donate some cash or join him for a bike ride around town Saturday and share their knowledge of cycling in the city.

“I just want to show people we are so so spoiled in the western world,” he said.

Can anyone join? Yes! We first do a short circle around downtown Seattle. When people want to cycle more, that’s no problem, because the next circle is going to be a bigger one. People who want to stop and have a chat with our 99%RIDE-team or have a drink at our meeting point (Dutch Bike Co. Cafe).. no problem either. We are there to welcome you and we love people who like to cycle, so let’s have a drink together. 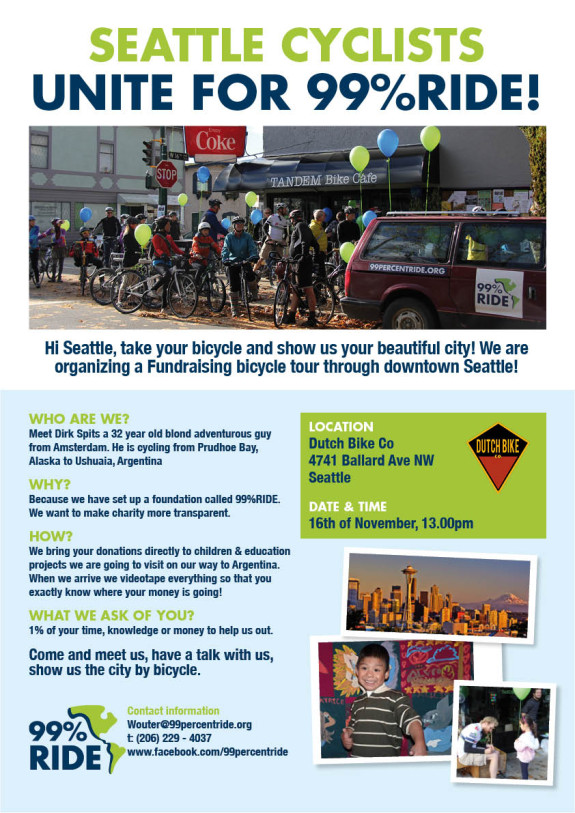