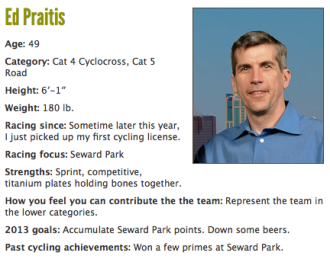 Friends and family are mourning the death of Ed Praitis, who died Tuesday during a lunchtime bike ride in Redmond.

Our deepest condolences go out to his loved ones.

According to a post on the Cascade Bicycle Club blog, Praitis slid out after riding over wet pine needles while heading downhill on Union Hill Road in Redmond. He slid into oncoming traffic and died immediately.

His racing team PCP Racing posted the following on their Facebook page:

We lost our teammate and good friend Ed Praitis tonight to a training accident on his bike. Ed was new to cycling but his passion for it was that of someone who rode all their life. He will be missed surely and our team is missing a great figure.

Ed Praitis passed away yesterday after being struck by a van during a lunchtime ride. Ed and his teammates were coming down Union Hill into Redmond when Ed slid out on wet pine needles, lost control and slid into oncoming traffic.

Ed was new to cycling but his passion for it was that of someone who had ridden their whole life. He rode the Seattle to Portland  twice and was a member of the PCP Racing team.

He will be greatly missed by his family, friends and the racing community.

20 Responses to Cascade: Man dies during lunchtime ride in Redmond