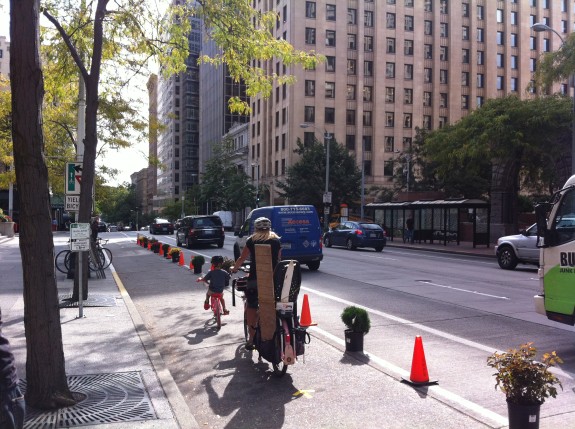 The City Council has proposed a change to outgoing Mayor Mike McGinn’s budget: Adding $1 million to the 2014 budget for design of protected bike lanes downtown.

Designed so everyday people of all ages and abilities find them safe and comfortable to use, protected bike lanes (also called “cycle tracks”) include a barrier of some kind between moving car traffic and people on bikes. This barrier is often either a short concrete curb, a row of planter boxes or a row of parked cars, depending on the desires of people who live and work on the street.

Cascade Bicycle Club and Commute Seattle demonstrated the potential of protected bike lanes by creating a temporary one-block temporary protected bikeway on Park(ing) Day. And as the FamilyRide crew demonstrates in the photo above, a little extra protection goes a long way to making downtown streets more comfortable, even during rush hour. 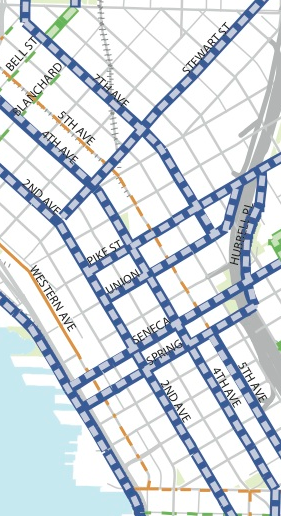 The Council proposal would direct $1 million currently intended for final design of the Center City Connector streetcar to instead go towards funding the downtown bikeway design (stay tuned for more on the streetcar soon). The money is more than half the funds the city anticipates will be needed to plan more than two miles of protected bikeways through downtown, the most expensive but also most beneficial location for such projects.

The Council also notes the intention to fund the rest of the design costs if the Budget Office’s mid-year updates show there is enough revenue.

The projects specifically noted in the Council’s budget proposal are completing the 7th Ave protected bikeway design (partially funded by Amazon), and getting as far along as possible in design of bike lanes on 2nd and/or 4th Avenues as well as a connecting route on Pike and/or Union.

In a related budget note, the Council directs the Department of Transportation to:

Develop a funding plan that will allow the 1⁄4 mile on 7th Ave and 2 miles on 2nd/4th, as well as the east-west connection between these two segments (eg., Pike/Union), to be completed and in operation by the end of 2015

If you want to make sure these plans are included in the budget, be sure to let the Council know. They will vote on a final budget later this month.

More details on the changes: