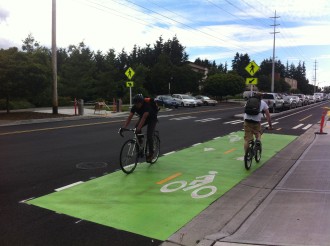 Mike McGinn called mayor-elect Ed Murray today to concede, telling him that “he was going to be in for an extraordinary four years.”

This is certainly true for cycling in the city. The number of people biking to work grew by 42 percent in just the first three years McGinn was in office (2009–2012, according to Census data). There are no signs this growth in cycling will slow down any time soon.

And this growth in cycling to work is not just novelty or frill as naysayers like to think. It’s vital to the city’s economy. In a recent op-ed for the Seattle Times, Downtown Seattle Association CEO Kate Joncas points out that biking, walking and transit have been absorbing every new commute trip in the state’s top employment center:

According to a Commute Seattle survey, 43 percent of downtown commuters choose transit — more than any other mode — and just 34 percent choose to drive alone. Census data show that, for the first time, less than 50 percent of Seattleites drive to work citywide.

So for a mayor whose public image has been tied so closely to urban cycling, what legacy is he leaving behind as he departs? And what groundbreaking moments does Murray have to look forward to during his first term in office?

Here’s a short list of projects on the ground that the mayor can take some credit for:

But almost more important than the projects on the ground is the incredible number of projects that have been essentially teed up for the next administration. When McGinn took office, he was handed a stack of paint-only bike lane projects (like Nickerson). He leaves office with plans in process for:

Whereas McGinn entered office with the Spokane Street Viaduct and Mercer Projects weighing on the transportation budget, he has avoided tying the next administration’s hands by committing to similar large and outrageously-costly roads projects. As mayor, Murray will have the ability to choose from a smorgasbord of world-class bike projects and neighborhood-driven safety desires, and he’ll have the means to make them happen quickly if he wants to.

And we believe that he will want to lead the city on these projects. Anyone who voted for Murray because they think he will fight bike lanes is probably in for a disappointment. They are not just pet projects of a cycling mayor. These projects not only support the city’s economy and the health of its residents, but also help keep the city at the top of the nation’s most forward-thinking and innovative cities.

Murray has said he supports them, and the City Council wants to fund them.

Safe streets, fast transit and comfortable bike lanes are the way of the future, and Murray has been elected to lead us there. The momentum behind safe and livable streets is far larger than any one mayor.  I look forward to watching Mayor Murray cut many ribbons in the next four years.