Portland Now Has 100 Street Bike Corrals! from Streetfilms on Vimeo.

The City of Portland has hit a milestone: 100 bike corrals installed, and as many businesses are still clamoring for one near them.

Bike Portland presents the number like this: The city replaced 163 car parking spaces with 1,644 bike parking spaces. That seems like a hell of a trade, and the city’s businesses appear to understand this well. From Bike Portland:

While these days it’s hard to keep up with bike corral installations, the program got off to a slow start back in 2004. The first ever location was on North Shaver at Mississippi in front of Fresh Pot. After that one went in, it took over two years for PBOT to install another one. The delay was caused because PBOT couldn’t settle on a design they were comfortable with replicating all over the city.

However, once the design became finalized, PBOT has struggled to keep up with demand. From 2004 to 2009, PBOT had installed just 20 bike corrals. Now they’ve done 80 in the past four years and there are currently another 98 bike corral applications under review. What accounts for the big backlog? As we reported in 2011, PBOT handles each request on a case-by-case basis and not everyone location gets the OK. 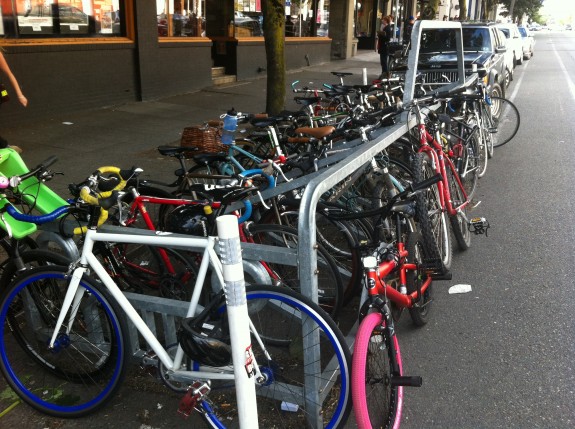 Yes, there is demand for more bike parking in Seattle (taken during Capitol Hill Block Party 2012)

Seattle, on the other hand, has been comparatively sluggish at installing the corrals. Last we checked, there were ten corrals in the city. We know of at least one more added since (Peddler Brewing), so that makes 11.

Here’s a comparison of Seattle vs Portland bike corral maps (big thanks to Madi at FamilyRide for maintaining the Seattle map!):

We have a whole lot of catching up to do!