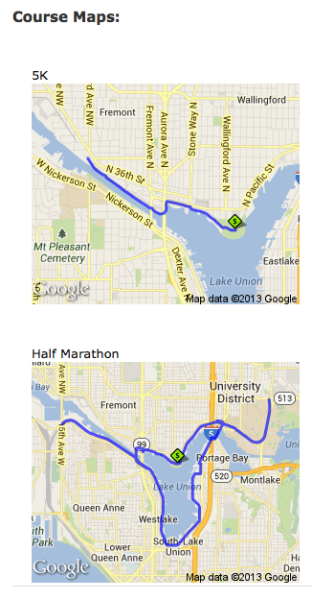 If you’re going to be out biking Sunday morning, expect some delays and detours on the Burke-Gilman and Ship Canal Trails. The Biggest Loser Run Walk will have 5K and half marathon events with an anticipated 2,000 participants.

Cascade Bicycle Club has the details on the trail closure schedule:

Starting at 8 a.m., the event will take participants routes that include

– the Burke-Gilman Trail from Gasworks Park to 45th Avenue NE between 9 a.m. and 1 p.m.

The ship canal will reopen at 10 a.m., the Burke-Gilman at 1 p.m. There will be signs along the planned course announcing the trail closures.

UPDATE: There will also be some intermittent closures on the Alaskan Way Trail in Sodo Saturday morning. Details from WSDOT:

Crews building a new overpass to the west of Seattle’s stadiums will intermittently close the bicycle and pedestrian trail just north of the South Atlantic Street/East Marginal Way South intersection from 7 a.m. to 3 p.m. on Saturday, Oct. 11. Crews must close the path to keep bicyclists and pedestrians safe while a crane is moving overhead. The closures will last about five minutes each.

The crane will be moving a large sign to make room for construction of permanent trail improvements north of South Atlantic Street. The trail work will begin this fall and be completed next year.

Details from the county:

King County Parks is making safety upgrades along the Burke-Gilman Trail at two driveway crossings in the vicinity of 91st Avenue Northeast in Kenmore.

The work is expected to take about one week to complete, and the project could be delayed if the weather is poor. Completing the work will bring the two intersections up to existing King County Parks regional trail standards.