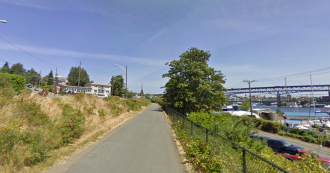 Approximate area where the victim was found. Image from Google Street View

A passerby on the Burke-Gilman Trail found a young woman who had apparently died of a gunshot wound early this morning in Wallingford.

Information released so far does not indicate the incident was bike-related or that it was a random attack.

At 4:30 this morning, a passerby called Seattle Police and reported a woman’s body on the Burke Gilman Trail in the 2400 Block of North Northlake Way.

Officers arrived and found a deceased woman in her twenties with a gunshot wound, and contacted homicide detectives.

Detectives are still investigating the incident, but do not believe the woman was randomly targeted.

We’ll have more information on this case as it develops.

UPDATE: The victim has been identified as 26-year-old Jowanna Gooden of Renton. KOMO has more details.

This entry was posted in news and tagged burke-gilman trail, crime, wallingford. Bookmark the permalink.