Ahead of fundraiser by group opposing a Westlake cycle track, Murray says ‘I support cycle tracks’ 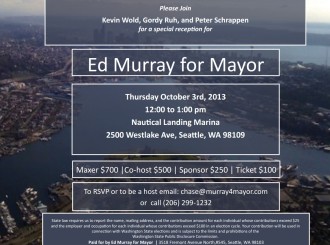 I received an email about a fundraiser for mayoral candidate Ed Murray recently from a group opposed to the idea of a safe bikeway connecting the Fremont Bridge and South Lake Union along Westlake Ave.

That project, which has received grant funding, is still early in the design process. But a group of people concerned that it could maybe result in some reduction of parking in the huge, city-funded parking lot are organizing early to fight it, and they have the idea that Ed Murray will help them out. From the email:

The Westlake Stakeholders Group oppose Mayor McGinn’s cycle track which will absolutely have a devastating impact on the well-being of the Westlake Community, and we strongly encourage the Community to embrace a change in the Mayor for Seattle.  Please consider attending the fundraiser for the leading candidate to replace Mayor McGinn, Ed Murray.

Save our parking! Save our business!

Are you concerned about losing 50% of your parking along Westlake? Would you like a change in direction in the mayor’s office?

So reads the campaign email. Despite some very clear factual errors (the project was actually selected for funding by the Puget Sound Regional Council and has been pushed hard by the City Council in addition to Mayor McGinn), the email raised some concerns that Ed Murray somehow gave this group the idea he would help them fight it.

Along with Publicola and Seattle Transit Blog, we reached out to the Murray campaign for a response yesterday. Only Publicola received a response: “I support cycle tracks. I used them in Europe. If they think I am opposed, then they’ll be surprised.”

However, Murray would not say whether he supports the Westlake project, telling Publicola he is not familiar with the specifics of the project.

We are still waiting for clear answers from Senator Murray about whether he supports this project as well as some other key biking and walking projects in the city like the Burke-Gilman Trail Missing Link in Ballard.

The Westlake project is unique because that are several good and very different options for building a safe bikeway. The vast city-funded parking lot is already heavily used by people looking for a flat, lakefront bike route, but there is no clear safe way to get through on a bike. Biking through the parking lot is frustating both for people on bikes who have to be extremely vigilant to avoid cars backing out of spaces and for people trying to park in the lot who are not expecting a steady stream of people on bikes.

Lots of space and options for redesign on Westlake. Image via Google Street View

Others choose to bike on the fast, four-lane street. But as Karlyn Beer discovered, that can be dangerous as well. She was struck by an allegedly drunk man who turned his truck in front of Beer in July, severing Beer’s thumb in the collision.

Something must be done to improve bike safety. I hope people organizing to “oppose” the cycle track will engage instead in hopes of finding a solution that works better for everyone. There is a ton of city-owned space between businesses and the far side of Westlake Ave, and many opportunities to make it a more inviting place to travel through and to.

For example, the Cascade concept image above shows a cycle track installed on the street itself. Other options would reorganize the city-owned parking lot to provide a consistent, predictable and safe bikeway through it. There are benefits and trade offs with both options, but either would improve safety and comfort along the street for all users and bring new customers to storefronts along the west bank of Lake Union.

Hopefully those with concerns will engage is a discussion instead of simply saying “no” to any changes at all.

And hopefully Senator Murray gives them this advice instead of taking the bait and opposing a project with regional support that would address such vital safety and access issues on what should be one of Seattle’s destination corridors.

60 Responses to Ahead of fundraiser by group opposing a Westlake cycle track, Murray says ‘I support cycle tracks’