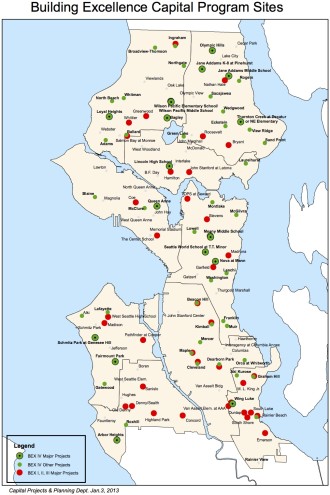 Map of BEX projects (obviously, not all of these will address car drop-off, but some could)

Schools all across Seattle are experiencing a revolution. After decades trapped in the school drop-off conundrum (Cars dropping kids at school makes it more dangerous to walk of bike to school, so more parents drive their kids. Repeat.), Seattle students and parents are finally taking action to reverse this trend. And after years of work, it’s finally catching on, and walking and biking to school is spreading like wildfire.

This is, of course, a wonderful development for Seattle’s schools. But so many of the school buildings were constructed or rehabbed with car drop offs in mind, perhaps it’s time to give some serious thought to what a biking and walking friendly school campus actually looks like. Giant parking lot between the gym and the school? Lines of drop-off and pick-up cars streaming across the sidewalks and crosswalks nearby?

Perhaps architecture and smart planning can help future Seattle schools avoid the drop-off conundrum in part through safe design. This is the challenge Cascade Bicycle Club wrote about recently after a meeting about plans for new Seattle Public Schools funded by passage of the BEX levies.

What may look like a great design to the architects and landscape designers — taking into account all of the site restrictions and neighborhood codes–, may still fall short when looked at through the lens of bike and pedestrian access. So after the architects had presented their ideas, community representatives and bike/ped experts were encouraged to provide their comments in the hopes of building schools that are safe and convenient for all modes of transportation.

The following bike/ped improvements are examples of the proposals that will be considered:

– One of the schools is constraint by space limitations and limited neighborhood park. A proposal suggests that a city park located just two blocks away could serve as a remote drop-off site for parents and/or buses if there’s a walking school bus in place to take the kids the remaining two blocks to school. This park could potentially also be used for outdoor school activities given the lack of an outdoor field on the small school building lot.

-In another school design, the architects had proposed a bus drop-off area on the paved playground due to the limited neighborhood parking spaces.  Instead, they are now exploring the option of moving the buses to a place where they won’t come in conflict with pedestrians and bicyclists. A  welcoming “community entrance archway” for walkers and bikers could be build where the bus entrance to the playground would have been.

This meeting is an example of what can be accomplished when we give opinions and options in the early stages of a planning process, before the plans are finalized. We are inspired by what these future schools can look like, and thank the architects for being receptive to our ideas.

It’s interesting that Seattle is discussing this issue at a time when the Dutch are struggling a bit to preserve their world-renown habits of extremely low drive-to-school rates. One Dutch idea that blows my mind: It’s actually illegal to drive your kid to school in the city of Groningen.

I’m not saying that Seattle should make driving to school illegal, but maybe we should start treating car drop offs as something undesirable instead of catering to the behavior.

5 Responses to Cascade: Let’s build schools for biking and walking